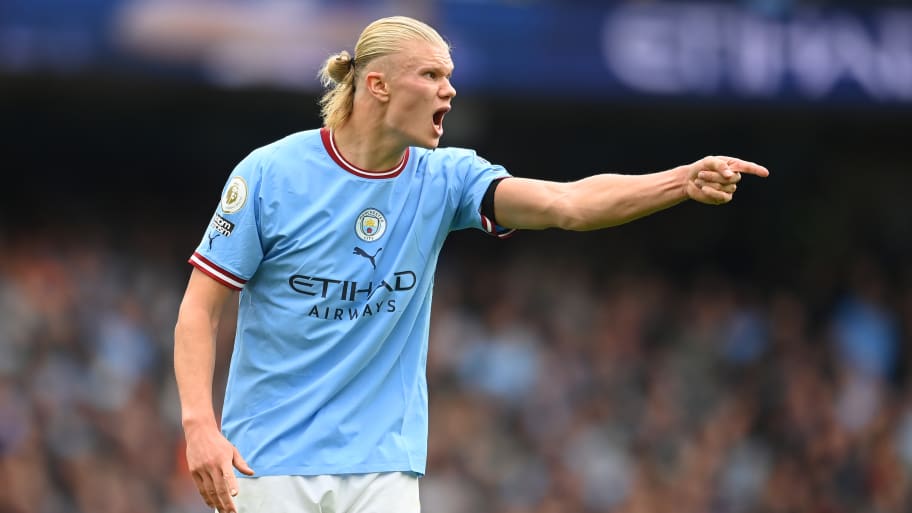 Unless you've been living under a rock for the last few months, you'll have heard that Erling Haaland is scoring quite a few goals at Manchester City this season.

The former Borussia Dortmund striker is enjoying playing in the dominant City team, getting opportunities galore from the likes of Kevin De Bruyne, Bernardo Silva and Phil Foden just to name a few.

But how does he compare right now to legends of the Premier League who set scoring records before the massive Norwegian arrived on the scene?

Here are the records for most goals scored in a season and how Haaland can break them.

What is the Premier League record for most goals scored in a season?

The record for most goals scored in a single Premier League season is held jointly by Andy Cole and Alan Shearer, who both netted 34 in their 1993/94 and 1994/95 campaigns respectively. Those feats were set during the 1990s when the Premier League played 42 games instead of the 38-game format currently in place.

Since the amount of teams in England's top flight was reduced, the best effort in a 38-game Premier League season was recorded by Mohamed Salah upon his return to England with Liverpool in 2017/18. The Egyptian bagged 32 strikes to edge out Harry Kane for that season's Golden Boot.

Shearer is legendary figure in the Premier League as the competition's greatest ever goalscorer.

He hit the back of the net an incredible 260 times during his spells with Blackburn and Newcastle and registered over 30 goals in three of his four Premier League seasons with the Rovers. His best return was 34, back in 1994/95, as he and strike partner Chris Sutton led Kenny Dalglish's side to the title.

He won the Golden Boot that season and remarkably defended that title for the following two years.

Cole was an incredibly consistent goalscorer during his prime and is behind only Shearer, Wayne Rooney and Kane in the all-time goal standings.

He only went past 20 league goals a season once in his career, but it was a record-breaking 1993/94 term for the former England international in the Magpies' first Premier League season.

He struck 34 times up front while partnering Peter Beardsley as Newcastle scored 82 goals, two more than league winners Manchester United and seeing them dubbed 'The Entertainers'. Cole soon joined Manchester United, where he would win five league titles and a Champions League.

Shearer and Cole share the all-time record, but in more modern times it's Salah who has registered the best return.

Having failed to make the grade at Chelsea during his first spell in England, the Egypt international made Anfield his goalscoring playground as he racked up 32 league strikes, also helping the Reds to the Champions League final where he would leave the field early with a dislocated shoulder.

He has since shared the Golden Boot twice - firstly with Pierre Emerick Aubameyang and Sadio Mane in 2018/19 and later with Son Heung-min in 2021/22.

Most goals in a single Premier League season

With his hat trick against Manchester United at the start of October, Haaland took his tally up to 14 goals in his debut Premier League season. He's only played eight games so far.

If we view his goalscoring in purely mathematical terms, the Norwegian is set to smash both the 42 and 38-game records. He currently averages 1.75 goals a game - if that rate is kept up, the 22-year-old will end the season with around 66 league strikes, comfortably beating the records held by Shearer, Cole and Salah.

At this rate, he would pass Salah's haul by late January and take the official record jointly held by Cole and Shearer in early February.

Manager Pep Guardiola has previously been chastised by members of the FPL community for his 'Pep roulette' routine - frequently swapping attackers in and out of his starting XI. That seems unlikely to be the case for Haaland, even when rotation happens naturally throughout the season, because of the unique and overpowering influence on their attack he has shown so far.

Haaland has enjoyed an incredible start and has already taken a huge chunk out of the goals he needs to break the record. Unless he's chopped down with an injury that keeps him out for a few months, it's Haaland's record to take.

This article was originally published on 90min as Premier League top scorers 2022/23: Is Erling Haaland set to beat the all-time season record?.