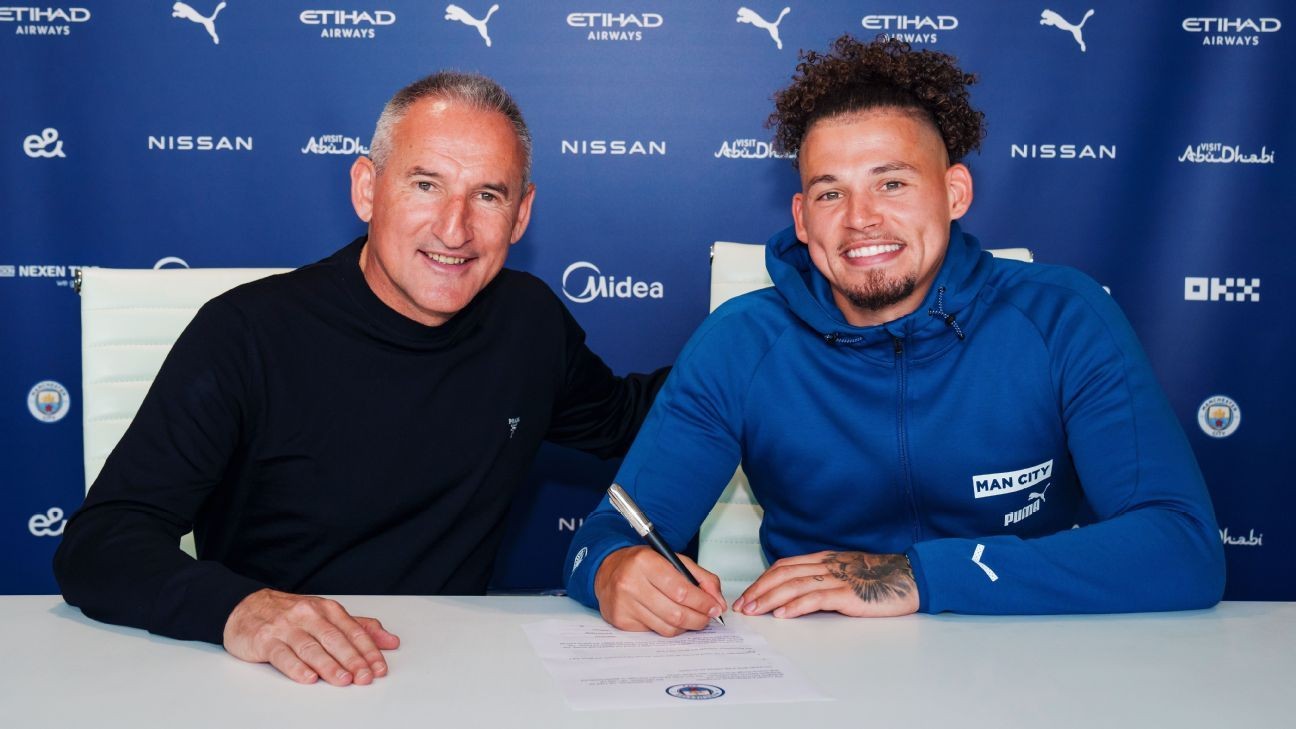 The start of the 2022-23 Premier League season is just a month away and the main contenders have all made moves to strengthen their squads, with Erling Haaland's move to Manchester City and Liverpool's signing of Darwin Nunez the most eye-catching transfers so far.

But with the new season set to kick off when Arsenal visit Crystal Palace on Aug. 5, the Premier League's Big Six are at different stages with their summer business. City, Liverpool and Tottenham have all pulled off significant deals, while Arsenal have quietly made key changes to Mikel Arteta's squad. As for Chelsea and Manchester United, both have made a late start to their recruitment plans.

So with all of the likely trophy contenders back in preseason training and preparing for the new campaign, how do they all rate so far in terms of signings and outgoings? Here are their report cards, presented in order of where they finished in the league last season.

Not content with raising the bar on the pitch, City have also led the way with their summer transfers adding Borussia Dortmund forward Erling Haaland (£51.3 million) and Leeds United midfielder Kalvin Phillips (£45m) to Pep Guardiola's squad for a combined total of less than £10m.

With £57.6m already raised by offloading Gabriel Jesus to Arsenal (£45m) and goalkeeper Gavin Bazunu to Southampton (£12.6m), the impending departure of Raheem Sterling to Chelsea for a fee in the region of £45m could yet see City emerge with a profit from their transfer business overall. Fernandinho has also left the Etihad as a free agent, with midfielder returning to Brazil to play for his first club, Athletico Paranaense.

City went into this summer window with three priorities: a new centre-forward, a No. 6 midfielder and reinforcements at left-back. The first two areas have been addressed by the signings of Haaland and Phillips, while Brighton & Hove Albion's Marc Cucurella is the prime target to solve the third.

Sources have told ESPN that City will listen to offers for Ukraine international Oleksandr Zinchenko, who can play at full-back and in midfield, but although Barcelona retain an interest in Bernardo Silva, there are no plans to offload the Portugal winger. United States goalkeeper Zack Steffen is set to leave the Etihad for a season-long loan with EFL Championship club Middlesbrough.

City have done incredible business so far, and have also done it quickly and smoothly. In terms of value for money, signing Haaland and Phillips for less than £100m and recouping that through player exits simply highlights the slick operation off the field at the Etihad.

Mark Ogden says signing Mohamed Salah until 2025 can only be good news for Liverpool.

It has been a summer of quiet evolution at Anfield. Sadio Mane (Bayern Munich), Takumi Minamino (Monaco) and Divock Origi (AC Milan) have all moved on, with Uruguay forward Darwin Nunez arriving from Benfica in a deal which could eventually cost Liverpool £85m in add-ons. Marko Grujic, Loris Karius, Sheyi Ojo and Ben Woodburn have also left the club with sporting director Julian Ward, who has replaced the outgoing Michael Edwards, making an early impact in the role.

Liverpool has also looked to the future by recruiting Fabio Carvalho (Fulham) and Calvin Ramsay (Aberdeen). But the biggest deal at Anfield so far has arguably been the three-year contract agreed with Mohamed Salah, with the forward signing his new deal last week and ending speculation that he could leave as a free agent in 2023.

There remains a desire to add a new midfielder to Jurgen Klopp's squad, but the likelihood is that Liverpool will wait until next summer to make a move for Borussia Dortmund's Jude Bellingham. But having signed Luis Diaz from Porto six months earlier than planned in January, Liverpool have done their business for this window, with no further moves anticipated.

Liverpool have resolved their long-term issues up front by adding Diaz and Nunez this year, as well as securing Salah to a new deal. The departure of Mane will be a loss, but the club have moved decisively to mitigate that and Klopp's squad looks as strong as ever following the summer business.

Although Raheem Sterling has agreed to leave Manchester City for Chelsea, Stamford Bridge has yet to welcome any new arrivals this summer. The completion of the Todd Boehly-led takeover of the club from previous owner Roman Abramovich has undoubtedly hampered Chelsea transfer business, but attempts to sign Sterling and Leeds United winger Raphinha have still to be finalised.

Club-record signing Romelu Lukaku has been loaned back to Inter Milan just a year after arriving in a £97.5m deal, while Antonio Rudiger and Andreas Christensen have departed as free agents. Danny Drinkwater and Charly Musonda have also moved on at the end of their contracts. With chairman Bruce Buck and senior executive Marina Granovskaia following Abramovich out of the club, co-owner Boehly has taken charge of transfer business as interim sporting director.

Plenty. Chelsea need to find a forward capable of scoring goals consistently due to Lukaku's exit, and doubts over the reliability of Timo Werner, Hakim Ziyech and Christian Pulisic. Links to Cristiano Ronaldo and Neymar are rooted in Chelsea's need for a proven scorer. There are also big gaps at the back for coach Thomas Tuchel to address following the departures of Rudiger and Christensen. With both leaving at the end of their contracts and Lukaku moving on loan, there is a worrying lack of funds coming in from outgoing transfers.

Reports have suggested that Chelsea could spend up to £200m this summer. Sterling is expected to be a £45m deal, with Raphinha likely to require a similar outlay if Chelsea can persuade him to end hopes of a move to Barcelona. Barca are also rivalling Chelsea for Sevilla defender Jules Kounde.

Chelsea and Boehly are in danger of overpromising and underdelivering during this window. Signing Sterling will be a positive sign, but with just four weeks until the start of the season, Chelsea have not displayed the decisiveness and speed they exhibited under the previous ownership regime.

James Olley debates how Richarlison could fit into Antonio Conte's plans at Tottenham.

Spurs are close to offloading Netherlands midfielder Steven Bergwijn to Ajax in a £25.5m deal, two years after signing him from PSV Eindhoven for £26.7m. Another £6.3m has been raised with U.S. defender Cameron Carter-Vickers moving to Scottish champions Celtic following a successful loan spell in Glasgow last season.

Spurs are still in negotiations with Barcelona over a loan deal for France defender Clement Lenglet while sources have said that a deal is close for Middlesbrough full-back Djed Spence. Although Dejan Kulusevski still has a year to run on his loan deal from Juventus, the Sweden international could make his move permanent this summer once Spurs complete their incoming business.

Longer term, Harry Kane's contract may also be reviewed, with the England captain's existing deal due to expire in 2024. Having come close to leaving last summer, there is confidence that Tottenham's revival under Conte could persuade Kane to extend his contract.

Spurs have been smart in their business so far and given Conte the reinforcements he demanded. It has been a display of intent and as such, they have pulled clear of Chelsea, Arsenal and Manchester United with their strengthening programme.

Arsenal have been steady rather than spectacular so far, but they have at least made early moves to avoid the last-minute deals that have been a long-standing problem at the Emirates. The signing of Gabriel Jesus from Manchester City (£45m) has given coach Mikel Arteta a proven Premier League goal scorer, with Alexandre Lacazette leaving on a free. Fabio Vieira's £31.5m arrival from Porto has bolstered Arsenal's options in attacking midfield. The signing of USMNT goalkeeper Matt Turner from NE Revolution (£5.7m) has given Arteta cover for England keeper Aaron Ramsdale.

Matteo Guendouzi (Marseille, £9m) and Konstantinos Mavropanos (Stuttgart, £2.7m) have followed Lacazette out of the club.

Arsenal are attempting to beat Manchester United to the signing of Ajax defender Lisandro Martinez, and they also have clear interest in Leicester's Youri Tielemans and Benfica full-back Alejandro Grimaldo. But while Arteta still needs to add quality in all areas, the Gunners must also offload a number of out-of-favour players to help balance the books.

Goalkeeper Bernd Leno is interesting Fulham, while the club will also listen to offers for Nicolas Pepe, Hector Bellerin, Lucas Torreira, Ainsley Maitland-Niles and Reiss Nelson. Clearing the decks remains the priority due to the abundance of unwanted players still in the squad from the Arsene Wenger and Unai Emery regimes.

Arsenal are making slow progress. The signings of Jesus and Vieira will make them better, but missing out on Champions League qualification was a hammer blow to the club's transfer plans and it is being borne out this summer. The club needs to be ruthless with many of its unwanted players.

Every summer brings a Manchester United transfer saga. Despite bold talk of things being different under new CEO Richard Arnold and manager Erik ten Hag, the club has been off the pace again in terms of signings and outgoings. So far, only Feyenoord left-back Tyrell Malacia (£13.5m) has been added to the squad, although an agreement is in place to sign free agent Christian Eriksen. A move for Ajax's Lisandro Martinez has come down to a straight battle with Arsenal for the Argentina international. But the big deal that will define United's summer is their pursuit of Barcelona's Frenkie de Jong. The two clubs are close to an agreement, but the player has yet to commit to the move and talks are dragging on.

Outgoings have been an issue too. While Paul Pogba, Nemanja Matic, Juan Mata, Edinson Cavani and Jesse Lingard have all left at the end of their contracts and goalkeeper Dean Henderson has sealed another loan move, this time to Nottingham Forest, no money has yet been raised by outgoings. Fulham are close to a £10m deal for Andreas Pereira, so that could be the first transfer to raise cash.

United need to finalise a deal for De Jong or move on to other targets, with midfield reinforcements regarded a priority by Ten Hag. Cristiano Ronaldo's future is another major issue. Sources have said United will allow him to leave if a non-Premier League club team is prepared to sign him, but if he goes, a new goal scorer must be found quickly. Ajax winger Antony is being lined up as potential replacement.

But while six players with first-team experience have already left -- Pereira is likely to be a seventh -- United still need to offload Phil Jones, Alex Telles and Aaron Wan-Bissaka, who could return to Crystal Palace, in order to trim Ten Hag's under-performing squad.

United have made little progress in re-shaping their squad after the worst Premier League season in the club's history, with more players leaving than arriving. Pressure is on football director John Murtough to get more deals done. Unless United can add another 3-4 players, including De Jong, this window is likely to be yet another failure for the club.