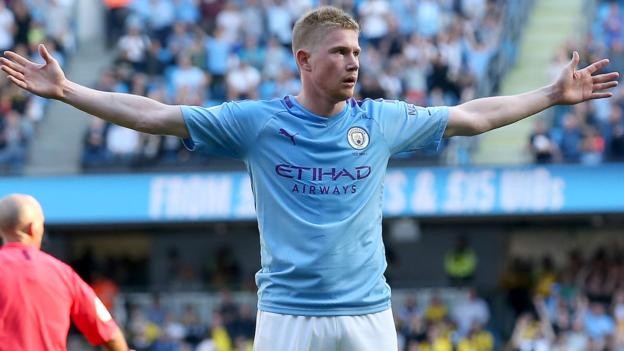 Manchester City thumped Watford 8-0 but what else happened in the Premier League on Saturday?

But they fell short of Manchester United's record 9-0 win over Ipswich, with Bernardo adding two more for his hat-trick and Kevin de Bruyne scoring a late eighth.

Burnley beat Norwich - who stunned Manchester City last time out - 2-0 to move up to seventh in the table, with Chris Wood scoring twice in the opening 14 minutes.

It was only the second time Canaries striker Teemu Pukki has not scored in a Premier League game.

Sheffield United are only behind Burnley on goals scored after a 2-0 victory at Everton. Yerry Mina's own goal was followed by Lys Mousset's first Blades goal.

In Saturday's lunchtime game, Leicester came from behind to beat Tottenham 2-1. Harry Kane gave Spurs the lead but goals from Ricardo Pereira and James Maddison turned it around.

Both sides had goals ruled out for offside by the video assistant referee.

There was a Friday night game, Bournemouth winning 3-1 at Southampton.

There are four games on Sunday - with West Ham hosting Manchester United and Crystal Palace at home to Wolves (both 14:00 BST), followed by Arsenal v Aston Villa and Chelsea v Liverpool at 16:30 BST.