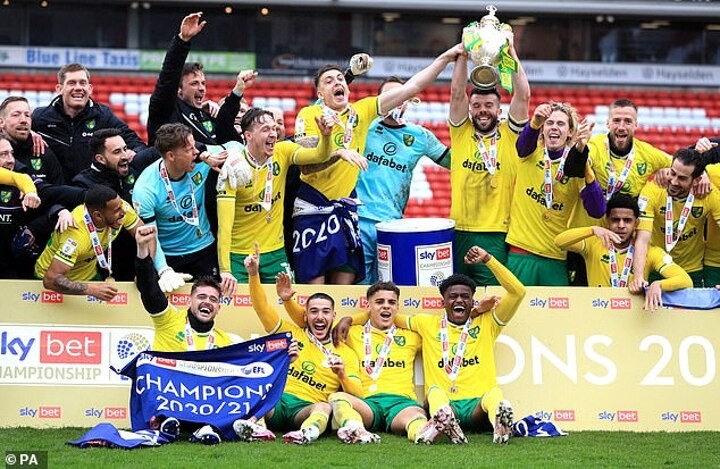 The new Premier League season is just weeks away from kicking off and there are three new teams gearing up for a big campaign of top-flight football.

Brentford, Norwich and Watford all gained promotion to the Premier League last season with this being an all too familiar feeling for the Canaries and the Hornets.

For Brentford, however, this will be their first-ever season in Premier League after they made it 10th time lucky in their play-off final win over Swansea back in May.

But while each side has managed to gain promotion after a gruelling season in England's second tier, they are now presented with the even harder task of staving off relegation and keeping their place in the Premier League.

Norwich have long struggled with this, given they have been relegated from the Premier League on five separate occasions – the joint-most along with West Brom.

Meanwhile, Watford spent just one season in the Championship and gained promotion back to the Premier League straight away, where they will be looking to stay.

But what exactly is each side doing to make sure it's a long stay and not just a brief stint in the Premier League this season? Sportsmail takes a look at each side's summer business so far…

After so many failed attempts of trying to reach the Premier League, Thomas Frank finally guided the Bees to promotion via the play-offs earlier this summer in what will be their first campaign in England's top-flight since 1947.

While the achievement will be rightly lauded for a team known for its attacking brand of football, Brentford will be desperate to make sure they're not just a one-hit wonder this season.

However, with the Bees in completely new territory, it appears the club have taken a more cautious approach to their transfer strategy ahead of the new season.

In fact, Brentford made their first summer signing earlier this week, with Frank Onyeka joining for an undisclosed fee from FC Midtjylland in Denmark.

Following his arrival, Frank was delighted with the move where he will play at their No 8 in a box-to-box role.

While Onyeka was their first notable arrival, the newly-promoted club bid farewell to Henrik Dalsgaard and Emiliano Marcondes, who both left on a free.

Marcondes was the hero in Brentford's play-off final victory over Swansea but the attacking midfielder was allowed to join Bournemouth on a three-year deal after his contract was left to expire.

However, while it initially looked like a slow and cautious approach to the market, Brentford announced on Wednesday that they had completed the £13.5m signing of Celtic defender Kristoffer Ajer.

Ajer had been at Celtic for five years after joining from Norwegian club Start as a teenager. The 23-year-old made 170 appearances at Parkhead and won the 'Treble Treble' between 2018 and 2020.

It hopes to be a solid bit of business for the club as they add a robust defender to the squad.

And while it still remains a cautious start to the transfer window so far, Brentford won't be panicking just yet.

For the last decade of so, the Bees have been clever in the market and have been able to make £100m in profit as a result. And with the new season just under a month from kicking off, Brentford fans can expect plenty more to be done before the window slams shut.

Arguably the busiest out of the three, the Canaries haven't stopped since the window opened back in June.

While they decided to cash-in on Emiliano Buendia, who was snapped up by Aston Villa for £40million, the Norwich board have not rested on their laurels and have reinvested a large amount of that money back into the team.

The last time Norwich were promoted back to the top flight, they were limited to spending just £20m on players but ultimately relied on loans and free transfers to keep them up.

This ultimately proved to be the wrong decision, with the club finishing rock bottom during the 2019-20 campaign with just 21 points from 38 games – 13 points adrift of Watford who finished just above them in 19th.

Now it appears the club have adopted a new attitude to their transfer strategy for this season, bringing in a wealth of talent from the Premier League and across Europe to help them in their bid to survive this time round.

Funds may still be limited, especially when you consider the financial impact of the pandemic, but Norwich decided to cash-in on star player Emiliano Buendia in order to improve a number of other positions elsewhere.

Villa shelled out a mighty £40m for the Argentine, which has allowed the club to bring in a new winger, left back, centre back, goalkeeper and two midfielders all with £7.5m left over from Buendia's sale.

Kosovan forward Milot Rashica joined in a £9m deal last month and has 21 goals in 87 Bundesliga appearances to his name. He will be expected to help fill the void left by Buendia.

In midfielde, the shrewd acquisitions of Pierre Lees-Melou from Nice and the loan signing of Chelsea star Billy Gilmour will provide the Canaries with much-needed top-flight experience in the centre of the park, given one of last season's standout performers Oliver Skipp has returned to parent club Tottenham.

The permanent signing of centre-back Ben Gibson from Burnley and Dimitris Giannoulis from PAOK has allowed Daniel Farke to shore up his defence, while Angus Gunn's arrival from Southampton provides them with another option in goal.

While fan favourite Alex Tettey left the club after nine years earlier this summer, the Canaries have plenty of hope that the saying 'out with the old, in with the new' will be their recipe for success this season.

Like Norwich, Watford have been busy bees in the transfer window this summer.

While they confirmed the £2m sale of Craig Dawson to West Ham after he enjoyed a superb campaign with the Hammers last season, the Hornets have been adding plenty of experience to a squad in abundance of it.

Veteran left back Danny Rose was snapped up after leaving Tottenham while Joshua King was also signed on a free after leaving Everton.

Ashley Fletcher, who graduated from Manchester United's academy before getting Premier League minutes under his belt at West Ham in the 2016-17 campaign, has also joined for nothing from Middlesbrough.

Hornets boss Xisco Munoz is looking to capitalise on his side's brilliant form from last season after just a year away from the Premier League.

Along with the free captures of Rose, King and Fletcher, Xisco has also splashed out £9m on Imran Louza from Nantes, while £3.5m has been spent on bringing Emmanuel Dennis to the club from Club Brugge, adding more firepower up top.

Watford don't look like slowly down any time soon, either, and are reportedly interested in signing Chelsea's Trevoh Chalobah.

Before the window opened, the club's sporting director Cristiano Giaretta insisted that they would not 'be changing the whole team' and would rather 'strengthen in some positions'.

It remains to be seen if any more deals will be made but with the club back in the big time, you can never be too sure.