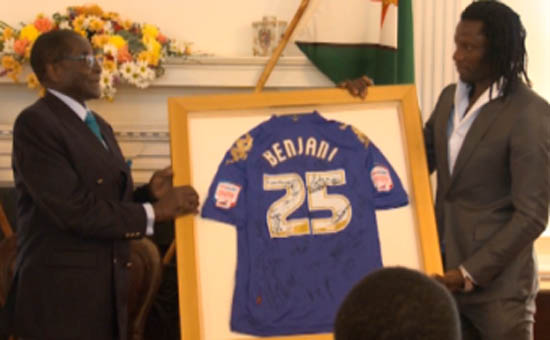 President Robert Mugabe has revealed he is a fan of Spanish side Barcelona and newly-crowned European champions, Chelsea.

Proceeds from the match which featured friends of Benjani against the Warriors would be used to support Mwaruwari's Foundation which plans to build a state-of-the-art football academy in Bulawayo.

Mugabe commended Mwaruwari for setting up the foundation adding he had keenly followed his career.

â€œYes, I followed you and watched some of your games, but I am a Chelsea and Barcelona supporter and I always want them to score,â€ he said.

â€œWhen I watch soccer, I do not want anyone to disturb me. Even my wife knows where to sit because while they are scoring in the field I will also be scoring at home, kicking everything in front of me.

â€œI have scored a lot of goals at my home, but I can only remember scoring once during the days we played a lot of football as I grew up.

â€œIt was rather fortunate, too. I just hit the ball towards goal and the goalkeeper was poor so it went in.â€

Mugabe narrated his own exploits as a young athlete before giving the millionaire footballers some advice about saving for their post-football lives.

"They (football players) live, eat, dream and sleep soccer,â€ Mugabe said. â€œAt the end of the day in some cases after they have done all that much, they have nothing; and there comes the afternoon and night you are grown up and there is nothing that you can offer because soccer has not been giving you money.

â€œSo we would want sport to provide for lives and for sustenance of our youngsters."

The veteran leader also said a future cabinet would likely see a separate Ministry for sport which has traditionally been bunched together with education and culture.

"We regard sport as part of education. It is managed by the Ministry of education, but perhaps, we might have to establish an entire Ministry of sport so as to give it that attention which it deserves," he said.