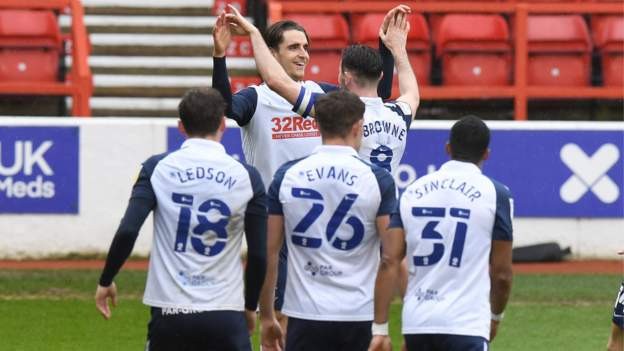 Preston fought back to beat Nottingham Forest and end the season with a fourth straight win.

Forest led when James Garner took a touch before smashing a superb 25-yard strike into the top-right corner of the net.

Tom Bayliss equalised in controversial fashion after the break with his first senior goal, appearing to help Scott Sinclair's cross into the net with his left arm.

And the Lilywhites soon found a winner when Ched Evans nodded a cross back into the box where Liam Lindsay headed in off the underside of the bar.

Only Derby have scored fewer Championship goals than Forest's tally of 37 this season, and Chris Hughton's side had won just two of their previous 13 matches, but they created plenty of chances in a free-flowing first half.

After Garner's stunner ended Preston's impressive run of four clean sheets, Lewis Grabban was twice denied by on-loan goalkeeper Daniel Iversen, while Anthony Knockaert fired an effort just past the post, and Joe Worrall had a goal chalked off.

After Preston levelled with their first attempt of the match - with a goal which should not have stood - Forest continued to come forward and Iversen once more saved from Grabban.

But Lindsay then completed the turnaround and Evans almost added a third when his strike was tipped round the post by Brice Samba.

While Forest ended the season 17th and winless in six, Preston climbed to 13th under Frankie McAvoy who has overseen five wins and just one defeat in eight matches since taking caretaker charge following Alex Neil's departure.

Ryan Yates (Nottingham Forest) wins a free kick in the defensive half.

Ched Evans (Preston North End) wins a free kick in the attacking half.

Yuri Ribeiro (Nottingham Forest) wins a free kick in the defensive half.

Attempt blocked. Lyle Taylor (Nottingham Forest) left footed shot from the right side of the box is blocked. Assisted by James Garner with a cross.

James Garner (Nottingham Forest) wins a free kick in the defensive half.