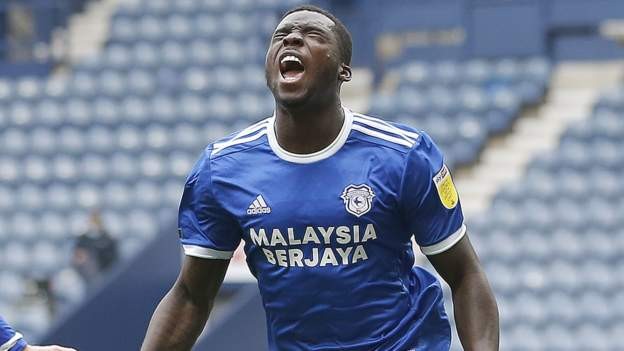 On-loan Liverpool winger Ojo rounded off a swift counter-attack with an emphatic finish to light up what was a largely forgettable contest.

Ojo's fierce strike, coupled with a solid defensive display, means Cardiff have won two of their three away league games this season.

Neil Harris' team have lost only once in nine Championship fixtures on the road - including July's play-off semi-final at Fulham - but Preston's home struggles continue.

Alex Neil's side have won just once in nine Deepdale league games stretching back to February and are without a Championship point - or a goal - on their own ground this season.

Preston had been hoping to build on an impressive comeback victory at Brentford before the international break, but it was Cardiff who found some momentum after what Harris has called a slow start to the season.

Neither side was able to make much progress in a drab first half in which defences were on top.

Preston striker Sean Maguire did manage an effort which Alex Smithies gathered at the second attempt, while Brad Potts shot straight at the Cardiff goalkeeper from outside the area.

The visitors created the best opening before the break, when Jordi Osei-Tutu floated in a cross from the right flank but Kieffer Moore headed wastefully over.

The goal the game desperately needed arrived early in the second half - and came from a Preston long throw into Cardiff's box.

Sean Morrison and Joe Ralls combined to clear before Moore did well, evading a challenge and feeding Ojo rather than Cardiff's other on-loan Liverpool forward, Harry Wilson, who was bursting down the opposite flank.

Ojo did the rest, stepping away from Ben Davies before flashing a shot past Declan Rudd and inside the near post.

Preston's struggle for any attacking inspiration went on, although substitute Jayden Stockley headed straight at Smithies late on.

With that, Cardiff could celebrate a victory which lifts them to 12th in the table, while Preston remain 18th.

"There was not much in the game. Cardiff are always a difficult team to play against.

"There was not much in it but we defended the transition [for Cardiff's goal] poorly. The first goal was always going to be crucial.

"I don't think Cardiff are far better than us."

"You know what to expect when you come to Preston. You know you have to compete - you have to do the physical aspect of the game.

"We stood firm. I don't think Alex [Smithies] had too many saves to make and we had the important moment in the game, the counter-attack.

"We had a clean-sheet mentality about us, we had the end product when it mattered and then we had the ruthless nature to get the three points. That's the three things we talked about before the game.

"We countered well and it was a great finish. That one moment of quality is vital in Championship football and Sheyi [Ojo] produced it. I am really, really pleased for him."

Tom Barkhuizen (Preston North End) wins a free kick in the defensive half.

Sean Morrison (Cardiff City) wins a free kick in the defensive half.

Attempt saved. Scott Sinclair (Preston North End) right footed shot from outside the box is saved in the top centre of the goal. Assisted by Tom Barkhuizen.

Harry Wilson (Cardiff City) wins a free kick in the defensive half.