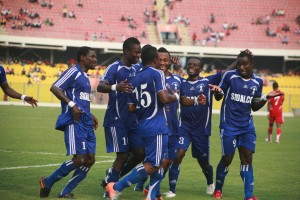 Berekum Chelsea will have to make amends against Liberty Professionals at the Golden City Park on Saturday knowing they will need to grind out a positive result to aid their title defence.

The champions settled for a 1-1 draw against Might Jets at the Ohene Djan Stadium in their opener.

Ex-Ghana Olympic team captain Michael Helegbe is re-establishing himself as one of the best creative players in the league with an exquisite range of passes and is the real heartbeat for Liberty.

Liberty will need a big season from the little â€˜wizardâ€™ if they are to stage a huge claim for the title as they seek to maintain their 100% record in the league.

New signing Baba Amando Adamu who joined Chelsea at the beginning of the season has promised to light the league with his sublime skills and super goals.

Regardless of the hyperbole, sensational striker Emmanuel Clottey is the real deal.

Fast, strong and capable of leading the line as a lone striker, the ex- Tema Youth and Eleven Wise attacker is available for selection and could find the back of the net with regularity.

Mega-spenders Medeama SC have been in the news for wrong reasons in the past few days.

Head coach Bashir Hayford was asked to go on a compulsory one-month leave following the side's shock 2-1 home defeat to All Stars.

Assistant coach Yusif Abubakar will step in the big shoe as his side trek to Dorma-Ahenkro to face 2010 champions Aduana Stars.

Stars are bruised following their opening day blip at Accra against Liberty Professionals and therefore look set to compound the misery of the Mauve and Yellows.

Their Romanian boss Aristica Cioaba as man capable of managing a top-flight Ghanaian side on the domestic scene is on the threat and will be keen to record his first victory in the elite division.

Giants Hearts of Oak scrapped a narrow 1-0 win over Berekum Arsenals in their opener to give Serbian trainer Nebjosa Vucicevic a breather following fans agitations for his removal in the wake of side's 3-1 defeat to arch rivals Asante Kotoko in the second leg of the MTN Super 2.

Despite the victory the team lacked the cutting edge and will need to improve on their performance if theyâ€™re to beat a motivated Mighty Jets in the local derby on Sunday.

Jets looked promising in their game against Chelsea and nearly escaped with the points until the late equalizer from the champions.

Both sides will sell out and exciting game at the Accra Sports stadium.

Wassaman United coach Herbet Addo instituted a defensive game plan in their opening defeat but will go all out against Berekum Arsenals at the Essipong stadium.

Both sides were opening day losers and will need to dig deep to record maximum points of the season.

Arsenals have the experienced players in their fold while the debutant will rely on the expertise of veteran coach Addo to inspire confidence and conjure magic.

Ebusua Dwarfs are the overwhelming favourites against new boys Bechem United at the Robert Mensah Stadium at Cape-Coast.

United were thought Premier League lesson when they were put to flight by New Edubiase at their adopted Baba Yara Stadium in Kumasi.

Emmanuel Baffoe's hat trick condemned them to the bottom of the 16-league standings.

The result has left management of the club licking their wounds and likely to reconsider to move to the Sunyani Coronation Park.

Unfortunately they come up against a resolute Dwarfs side who seem to have benefited from the novelty GHALCA G8 pre-season competition.

Dwarfs' ability to hold AshantiGold to a 1-1 draw at their own backyard speaks ample volumes of their pedigree and Bechem have to rely on experienced ex-Ghana international Peter Ofori Quaye to cause an upset.

Elsewhere, after causing the season's first major upset, Wa All Stars will play as guests of Tema Youth at the Wa Park.

New import Michael Gator has recovered from a minor knock and will be available for selection in Sundayâ€™s meeting at home.

The club, owned by Ghana Football Association President Kwesi Nyantakyi, has set an audacious target of finishing in the top four and they look poised to bask in their second win of the season.

Early table-toppers New Edubiase welcome Heart of Lions to their home grounds, knowing another breathtaking performance will see them maintain their position on the league table.

Finally, the biggest match of the weekend would be at the Baba Yara stadium in the late kickoff (18:15 GMT) where Asante Kotoko will be under intense pressure to bounce back to winning ways.

The Porcupine Warriors managed to share the spoils at Tema last weekend, in a game that was largely characterized by inconsistent refereeing decision.

Kotoko battle their regional rivals AshantiGold FC in what promise to a tough contest.

The game involving the two sides have produced thrills in the past and Sundayâ€™s meeting will not be an exception.

Kotoko boss Maxwell Konadu is under pressure to win his first game of the season, to inspire some confidence in the followers while his Croatian counterpart cannot afford a slip.