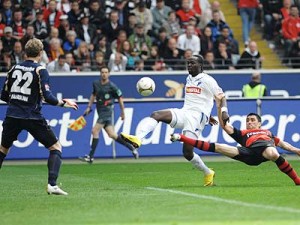 Ghana striker Prince Tagoe has donated approximately US$5,000 to his former club Tudu Mighty Jets for qualifying for the countryâ€™s top-flight league.

The Hoffenhiem player made the donation as a token gesture as the community club qualify for the Premier League two weeks ago after several near misses.

Mighty Jets, who have passionate supporters in the Zongo communities in Ghana, are delighted that the Hoffenheim player has stepped in to encourage the young ones in one of Ghanaâ€™s biggest player factories.

â€œHe has not forgotten that some few years ago he was among the young players here and has now returned with a massive gift.

â€œEven his presence to congratulate the players has been a massive confidence booster for the young players here and they will never forget him.

â€œWe are extremely grateful and we will continue to pray for Prince success. The vast majority of our players are young and with a gesture like this they would want to emulate him to reach the heights he has achieved.

â€œPrinceâ€™s donation is extremely generous and we will ensure that his money is put to good use.

â€œConfidence is returning among the players and supporters that their years of trying to get to the top league have not gone to waste.â€

Tagoe says he wants to encourage the poor and talented young players in Mighty Jets to work hard to to achieve their goals.

He said: â€œFew years I was in the same position as the players are this club and thanks to the support, coaching and love I received, I have reached this level.

â€œThis is a token to encourage management who go through hard times to keep the over 200 players from the junior teams to the top level.

â€œJets is my mother club and if God has given me the position to be able to help them and encourage my junior brothers I am all too willing. I am very happy that the club has qualified.â€

Tagoe played for Mighty Jets before moving to Maamobi Youth and Hearts of Oak.