Ghana winger Christian Atsu has been at Everton for over two months, and we are perhaps in a position to evaluate his contribution to date.

Naturally, when writing a progress report for any player, it is important to consider what is expected of them, as well as their contribution and output.

Atsuâ€™s arrival at Goodison Park was accompanied with much excitement.

When his signature was secured, Roberto Martinez spoke warmly about what he expected from the winger-cum-forward [via the Daily Mail]: â€œWe are really excited and are desperate to welcome him to Finch Farm (training ground) to allow him to feel the Everton way quickly. 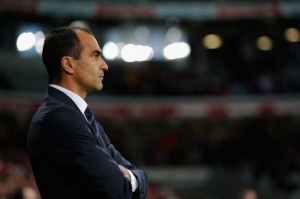 He had every right to be so gushing, in Atsu he was acquiring one of Africaâ€™s brightest young talents. The former FC Porto man may be small in stature, but he is a forceful operator and difficult to knock off the ball. Similarly, he boasts fine finishing and crossing ability which, when allied with his devastating pace, makes for an effective wingman.

Atsu may never have featured in the Premier League, but he already has experience that few in the Everton squad have. He has featured in the World Cup, the Champions League and the Africa Cup of Nations, and is a former Portuguese champion.

Thereâ€™s no doubting that Atsu is raw and in need of refinement. His passing, for example, is one area that particularly needs work.

Considering his abilities on either flank, the Black Star is surely set for great things.

This is where Roberto Martinez comes in. The Spaniard is one of the masters of the slow build; he enjoys a burgeoning reputation for polishing raw talents and forging accomplished Premier League performers from the unrefined makings of a star.

At Wigan Athletic, he helped in the development of the likes of James McCarthy, James McArthur and Callum McManaman.

â€œChristian is a experienced young man and to be that experienced at a young age is incredible.

â€œHe had a really good spell in Portugal then a big move and has played a lot of games in Holland. Playing in a World Cup with Ghana will give him a lot too.

â€œHe can play on both wings, play through the middle and has appreciation of space.

â€œTechnically he is very gifted and will fit extremely well. He has the hunger and desire to want to show what he can do in the Premier League and we feel we are ready to give him that opportunity.â€

AtÂ Everton, players such as Ross Barkley,Â RomeluÂ LukakuÂ and John Stones have flourished, while Barcelona were also keen for the formerRealÂ SociedadÂ man to work with one of their young prodigiesâ€”GerardDeulofeuâ€”last season.

He has also spoken openly about the value he places in youth [viaÂ The Mirror]: â€œYoung players bring you that unknown quantity that allows you to reach higher aims,â€ he began.

â€œWe have the stability of the senior players who week in, week out, give you a solid level. But the youngsters are very important in trying to help us push ourselves into something bigger."

Last season,Â DeulofeuÂ joinedÂ EvertonÂ and was asked to bring more movement, pace and directness to the Bluesâ€™ attack. His decisions were occasionally rash, and he certainly drifted out of games, but he was unpredictable and added another dimension to the Toffeesâ€™ attack.

The loan spell was a success, so much so that he earned a Spain call-up and was backed for a first-team spot with Barcelona by Martinez. As reported by Sky Sports, via Mundo Deportivo, the manager said: "He is ready to play for Barcelona because he has special talent, certain qualities that make him stand out."

Atsu arrived at Goodison Park amidst a serendipitous collection of conditions. He appears to be in the right place to contribute regularly for a top-half Premier League side and he should benefit from the tutelage of Martinez.

The limit of Evertonâ€™s squad and resources, and the demands of a Europa League push and the battle for the EPL top spots should ensure that Atsu receives ample playing time to prove himself to the fans on Merseyside.

It is against this context that any Atsu progress report must be considered.

Based on the great expectations that accompanied his arrival, itâ€™s faire to say that the Black Star hasnâ€™t delivered.

He has started only one Premier League game, where he played an hour in the defeat against Crystal Palace. His other appearance in the top flight came against Arsenal, when he entered as a late substitute but was impotent as the Gunners stole the points away from Martinezâ€™s side.

In other competitions, his contribution has been similarly limited; he has only completed the 90 minutes for Everton on one occasion, in the League Cup against Swansea City and brought precious little to the table as the Blues delivered possibly their worst performance of the season. 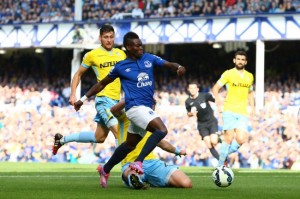 He is yet to win with his new club, but at least he has avoided defeat in his last two fixtures with the Merseysiders; Atsu was replaced after 45 minutes against Krasnodar away and only played the last 10 against Lille on October 23.

Itâ€™s hardly a start to set pulses racing. The minutes have been scarce and the points have been even scarcer.

Upon Atsuâ€™s arrival at Finch Farm, Martinez admitted that it would take time for the youngster to find a place in the first team, and that he was initially looking at the Ghanaian to be a squad member [via The Daily Mail]: "That would be a really good positive move to boost the squad. How ready he will be to have him in the team, it's too early to tell but we want Christian to be part of the squad as soon as we can.â€

Surely, we are still to see the best of Christian Atsu in an Everton shirt. Over at West Ham United, Diafra Sakho has exploded into action in the Premier Leagueâ€”it has helped that he has joined a team playing excellently.

Atsu, on the other hand,Â hasnâ€™t had this luxury.Â EvertonÂ started the season badly, and even after winning their last two matches, they are still only down in ninth place. They have won as many games as they have lost so far this season.

As things start picking up for the Blues, as the team begin playing with more confidence, we can expect more from the sideâ€™s more exciting players.

At this point in time, itâ€™s hard to give anything other than a negative conclusion forÂ Atsuâ€™s start to life atÂ Everton. He has rarely featured,hasnâ€™t ignited and has shown little of the talent that brought him toGoodisonÂ Park in the first place.

If we revisit this feature some months down the road, however, one suspects that the West Africanâ€™s class, pedigree and personality will have shone through.