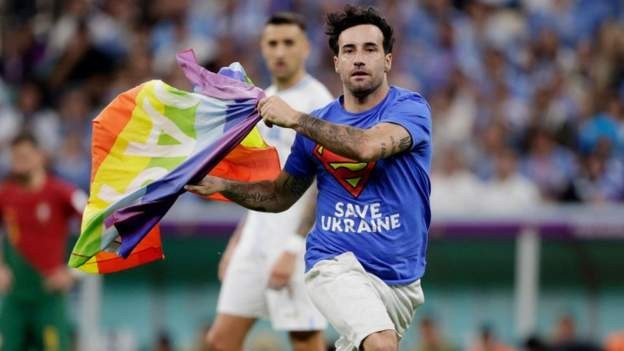 A protester carrying a rainbow flag invaded the pitch during the World Cup game between Portugal and Uruguay.

The protester wore a t-shirt with 'Save Ukraine' on the front and 'Respect for Iranian woman' on the back.

Stewards chased him and he dropped the flag before being taken off the field at Lusail Stadium, the venue for the final on 18 December.

The decision to stage the World Cup in Qatar, where homosexuality is illegal, has been criticised by LGBTQ+ groups.

Before the tournament, Fifa wrote to all 32 competing teams to tell them to "focus on the football".

Qatar World Cup ambassador Khalid Salman called homosexuality "damage in the mind" prior to the tournament, comments which Human Rights Watch said were "harmful and unacceptable".

England, Wales and other European nations decided not to wear the OneLove armband at the World Cup after Fifa threatened captains with sporting sanctions.

The captains, including England's Harry Kane and Gareth Bale of Wales, had planned to wear the armband during matches to promote diversity and inclusion.

Meanwhile, Iran players declined to sing their national anthem before their World Cup match with England in an apparent expression of support for anti-government protests.

Protests in Iran were sparked by the death in custody in September of Mahsa Amini, a 22-year-old woman who was detained by morality police for allegedly breaking the strict rules around head coverings.