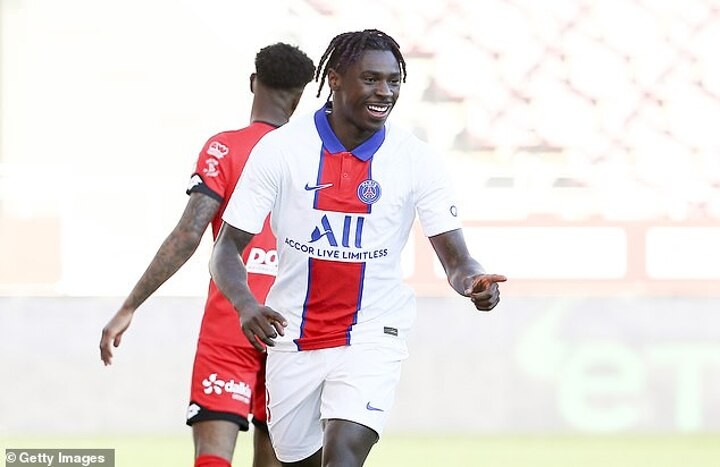 PSG have confirmed that on-loan Everton striker Moise Kean has tested positive for Covid-19 and is now in a period of self-isolation.

The French giants announced the positive test on Wednesday afternoon, four days after Kean bagged his 11th Ligue 1 goal of the season in a 4-0 thrashing of Dijon.

PSG made no mention of Kean suffering with symptoms of coronavirus, but he will miss tonight's game away at Bordeaux, as well as Saturday's clash with Brest.

The 21-year-old could yet be back for next week's Champions League last-16 second leg against Barcelona if he returns a negative test before the game in Paris.

PSG have been particularly hard-hit by the coronavirus pandemic, with a number of first team stars having missed games after testing positive.

Neymar, Kylian Mbappe, Angel Di Maria, Keylor Navas and Leandro Paredes have all spent time in self-isolation after contracting the virus this season.

Manager Mauricio Pochettino, who replaced Thomas Tuchel at the beginning of this year, was also found to be positive for Covid in January.

Kean, meanwhile, will hope his spell on the sidelines doesn't ruin his momentum after a brilliant period on loan at the Parc des Princes.

Having struggled for playing time under Everton boss Carlo Ancelotti, the Italian has hit form at PSG, scoring 15 goals in just 27 appearances in all competitions.

PSG do not have the option to make his move permanent this summer, but could still open talks with the Toffees, who are reported to want up to £70million for Kean.