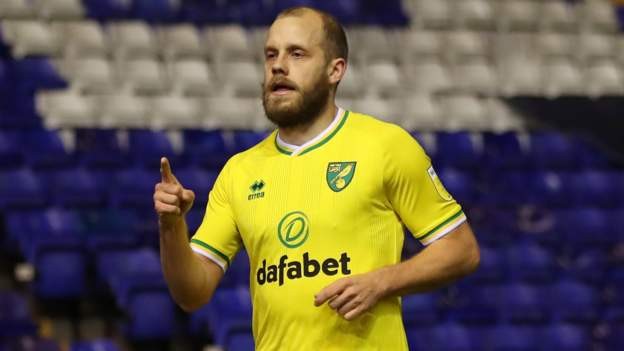 Teemu Pukki scored twice and missed a penalty as Norwich City beat Birmingham City to go 10 points clear at the top of the Championship.

Aitor Karanka's Blues, who looked to have turned the corner with victory against Sheffield Wednesday at Hillsborough on Saturday, gave a spirited display.

But, after dominating early on, they were undone on 26 minutes when Dimitrios Giannoulis and Kenny McLean linked up down the left to slip in Pukki on the left side of box and he drilled home a powerful left-foot shot from a tight angle.

Blues then not only survived Pukki's miss from a 35th-minute penalty after keeper Neil Etheridge clipped Todd Cantwell, they hit back to level just three minutes later through Ivan Sanchez.

But the hosts' luck was out when the ball broke kindly for the Finnish striker to fire Norwich back in front.

And, with Blues committed upfield chasing a second equaliser, on-loan Spurs midfielder Oliver Skipp capitalised on a three-on-one breakaway to wrap it up five minutes into injury time.

While Pukki has now hit 17 Championship goals this season - and six in the Canaries' last four games, including three at St Andrew's - he missed out on a hat-trick.

Todd Cantwell won a penalty when he spread-eagled himself over Neil Etheridge's legs, but the Blues keeper made amends, guessing right as he moved to his left to save Pukki's effort with his legs.

Three minutes later, Sanchez levelled when his left-foot shot from the edge of the box was blocked by Norwich keeper Tim Krul but the Spaniard was sharp enough to follow up and put away the rebound.

Norwich then had luck on their side when Emi Buendia's left-foot shot deflected off home skipper Harlee Dean and teed up nicely for Pukki, who ran on to slide home.

The Canaries' injury-time clincher was even more cruel on a Blues side who are now without a home win in 12 games and have won just three of their last 32 home league matches.

Emiliano Buendía (Norwich City) wins a free kick in the defensive half.

Dimitrios Giannoulis (Norwich City) wins a free kick in the attacking half.

Emiliano Buendía (Norwich City) wins a free kick in the defensive half.

Jake Clarke-Salter (Birmingham City) is shown the yellow card for a bad foul.