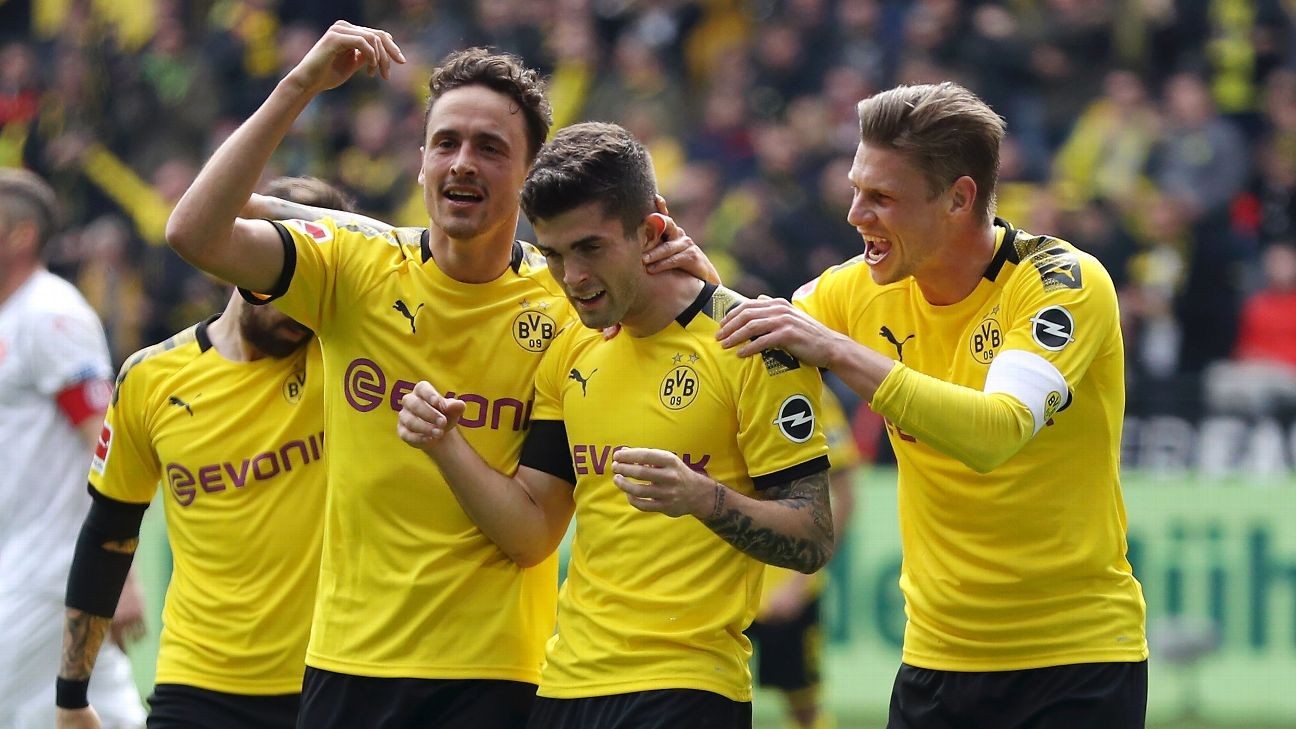 DORTMUND, Germany -- Christian Pulisic scored a goal in his final home match for Borussia Dortmund as the club kept their Bundesliga title hopes alive before the United States star joins Chelsea in a €64 million transfer this summer.

Dortmund beat Fortuna Dusseldorf 3-2 and Bayern Munich drew 0-0 with RB Leipzig on the penultimate matchday of the Bundesliga season. Bayern, two points ahead of their rivals, can secure their seventh consecutive title with a win or draw against Frankfurt next weekend as they have a vastly superior goal difference.

Pulisic handed Dortmund the lead against Dusseldorf with a close-range header four minutes before half-time and was fighting his emotions when celebrating.

"The goal was just perfect. Thomas [Delaney] headed it right across. I couldn't miss from there. It was a perfect way to start. I was a bit overwhelmed as well. Everything worked out perfect today," Pulisic told reporters after the match.

"Before was honestly the hardest part. They gave me a little ceremony and it hit me when I was walking to the locker room. It was really emotional. My last time. It was not easy."

"It wasn't an easy situation for Christian," Dortmund squad manager Sebastian Kehl explained. "It was very emotional. You could see that in the locker room before the match. But he can just be proud how he solved it today. And also how well he handed the overall situation."

After the restart, Dortmund came out of 15 crazy minutes with a 2-1 lead. That included one goal at both ends, a missed Düsseldorf penalty and a Bayern goal ruled out by the VAR in the Leipzig match that would have handed them the title on the day.

Germany international Mario Gotze and Dusseldorf's Dawid Kownacki scored in injury time to make it 3-2 and ensure that the title would be decided next weekend, while Pulisic was substituted seconds before Gotze's goal and received a standing ovations from the fans, who also welcomed the club's former captain Marcel Schmelzer (who could also have played his last home game for Dortmund) to the pitch.

A draw against Europa League sensations Eintracht Frankfurt would secure the Bavarians yet another title. But Dortmund vowed to fight until the final minutes of the season.

"It was a perfect last home game for me. But we will never give up," Pulisic said. "All we can do is concentrate on what we can do. If we win our game, we have a chance."

Pulisic was delighted to score in his final home game.

"Thank you all for five wonderful years. Without you fans I would not be here. Dortmund will always feel like home," Pulisic told the stadium in German. "All the best and hopefully see you again one day."

He told reporters: "I have been here for five years. And I felt it was necessary to do it in German. It was the right thing to do to say goodbye in German."

Pulisic made his debut for Borussia Dortmund aged 17 and went on to become the youngest ever player in Germany's top flight to score two goals.

In January 2019, Chelsea signed Pulisic for €64m but loaned him back to Dortmund until the end of the season.

In 89 Bundesliga appearances, Pulisic has now scored 13 goals for Dortmund with another two in 22 Champions League matches, and three in eight DFB-Pokal games. The only trophy he has won during his time at Dortmund was the 2017 German Cup.