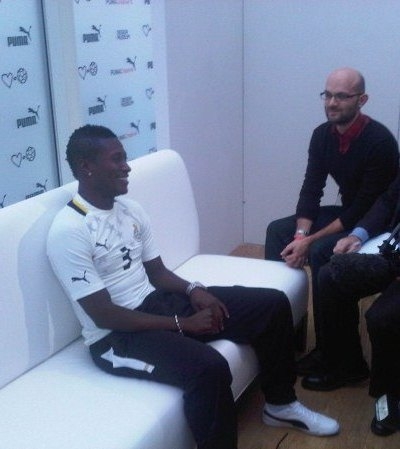 Puma unveiled the new Ghana national team football kit for the 2012 Africa Cup of Nations at an event in London.

Striker Asamoah Gyan was the first player to wear the shirt which seems to appeal more to Ghana fans than the previous other designs.

Unlike the previous Black Stars jersey, the new one is a unique design with different stars and all the colours of Ghana on the right hand side.

The UAE-based attacker was among the several other players including Samuel Etoâ€™o Yaya Toure, Stephen Pienaar, and a few others who were at the launch.

The availability of the jerseys for purchase has been an issue for the fans to purchase online or in shops across the country which has sparked the trade in fake Puma Ghana jerseys.

Despite these concerns, Pumaâ€™s sponsorship of the Black Stars has been beneficial in financial terms since it signed Ghana in 2005.