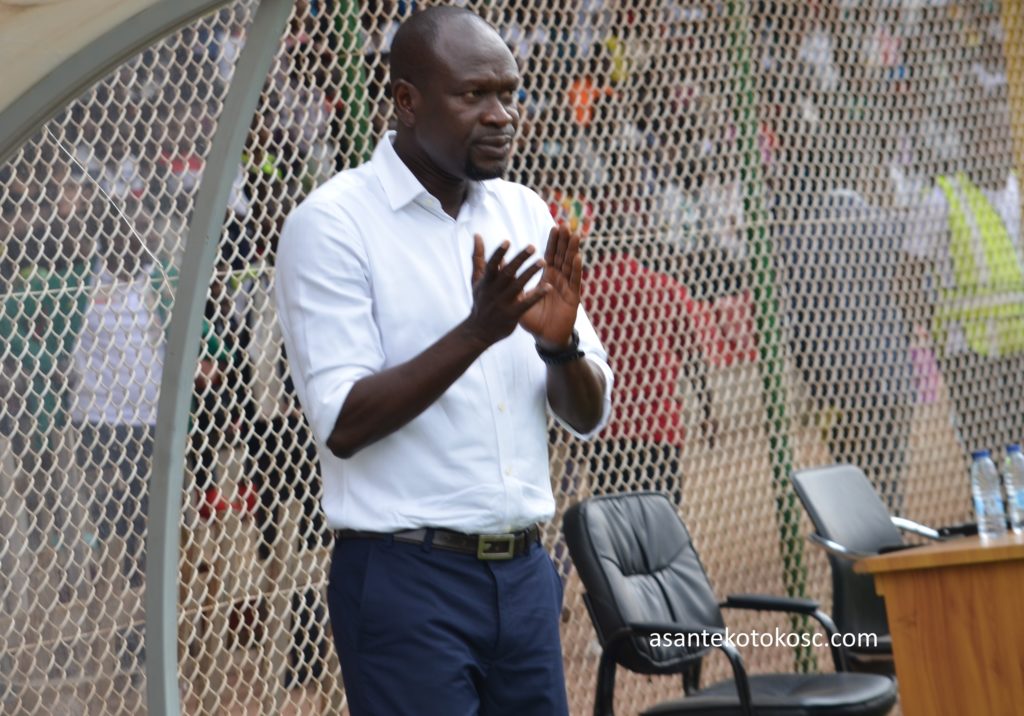 He is the very few coaches who have handled almost all the top notch clubs in the Ghana Premier League.

His coaching started at Sekondi XI Wise in 2009.

His big move came almost immediately as he was signed on as the head coach of Accra Hearts of Oak in 2012.

He then went on to join Dreams FC before Ashantigold and now Asante Kotoko.

Charles Kwablan Akonnor as he is known in football circles was a former Ghanaian international who captained the Black Stars after the retirement of the legendary Abedi Pele.

He made his name in Germany where he starred for Fortuna Koln, Wolfsburg and SpVgg Unterhaching. He also had spells with Danish side before calling time on his career in Cyprus with Alki Larnaca.

Akonnor has guided the Porcupine Warriors into the group stage of the Total CAF Confederation Cup in Group C alongside Zambian duo, Nkana and Zesco United as well as Al Hilal of Sudan.

CAFOnline.com: What is your ambition with Asante Kotoko? Wow, that is a tough one. I will say that as coach of any side, your main target is to make sure that the team improves than you took over. All the teams I have coached in Ghana, I tried as much as possible to better them match after match, and win laurels for the team when the opportunity arrives.

How has the journey of the CAF Confederations Cup been? To be honest, when I was taking the job I had no idea of playing in the CAF Confederation Cup because there was nothing of that sort on the table. But when the opportunity presented itself, I decided to take it. I discussed with the management and how I believe playing in the competition will help the Club, especially now that there’s little football activity in the country and they accepted, so here we are. The journey hasn’t been easy, but the team is eager to make a name for themselves and it shows in both their training and matches. They keep improving match after match and that is a good sign.

Did you think you will get to the Group stage, especially as you barely took charge of the team and were at the time still recruiting players? I have said it over and over again that had we played in the preliminary round, we would have struggled, because the team was not that strong. And so when the news got to us that that match has been cancelled, we were happy. And it motivated us to train harder to make sure that we do not disappoint our supporters in our next game which was against Kariobangi Sharks. Indeed, in the first leg we had a tough game, our first of the competition. But we managed to hold them in Kenya before winning the second leg here. The game against Coton Sport was an improvement to the previous two games against Sharks and we won the first leg 3-1 in Cameroon and 2-1 in Kumasi. It’s been a fairly good journey for us.

What do you make of your chances in the group? All the teams at the group stage, then they are here for business. However, we believe that we have what it takes to come out of this group successfully and we are going to take one match at a time. Our aim is to keep the winning momentum and do our best to get a good result against Zesco on Wednesday in Kumasi.

How important is the CAF Confederation Cup to you personally as a coach? It is very important. It’s of trophy that has eluded Asante Kotoko. Since the creation of the competition in 2004, Kotoko has yet to win it. We all know they were in the final in the maiden edition, but lost to archrivals Hearts of Oak. Since then, it’s been up and down and this is their third appearance at the Group stage. I’m personally looking forward to make a stronger impact by qualifying to the knockout stages, and farthest as possible. It’s not a personal thing, but the entire Asante Kotoko fraternity.

What are some of the challenges you’ve faced as young coach in Ghana? It’s been tough. I wouldn’t want to go into all but what I can say is that when we started coaching in Ghana, nobody really believed that we will get this far. Our style of dressing was different and many laughed at us because we chose to wear suit and tie in the hot sun. It didn’t deter us, we kept moving and focusing on our job and today here we are. One thing I can say helped me personally is the fact that I believed in myself even when the odds were against me. Whatever it is that you set out to do, just trust and believe yourself that you can do it. The road may not be straight at all times, but with perseverance and focus you can achieve that.

How do you see the new generation of coaches emerging in Ghana? It looks very promising. Most of our senior colleagues are leaving the occupation and we are also learning from those who are around. We’ve had very great coaches in the past and we are happy that a few of them are still around to offer us the needed advice as and when we need it. I will say the future is bright when it comes to coaching in Ghana. Many young and energetic coaches are emerging (men and women), and it looks good.