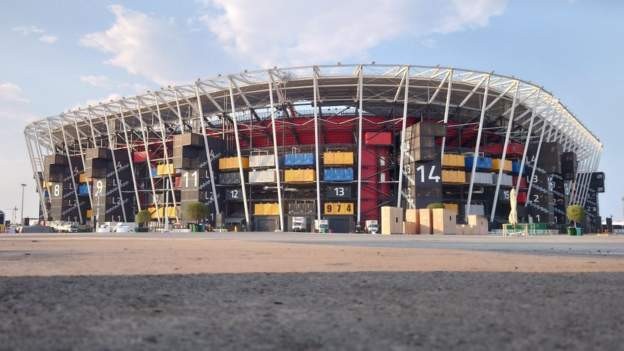 The World Cup's first temporary stadium is being dismantled after hosting seven matches in two weeks at Qatar 2022.

Stadium 974 - named after Qatar's international dialling code and the number of shipping containers used in its construction - was one of seven new grounds built for the tournament, while an eighth was extensively redeveloped.

The entire steel structure of Stadium 974 can be repurposed for another World Cup or major sporting event as either a venue of the same size or several smaller facilities.

Qatar called the stadium its "beacon of sustainability"external-link as part of its pledge to deliver the first carbon neutral World Cup.

As well as seven new stadiums, Qatar has a new airport, metro system, roads and about 100 new hotels - but has faced intense scrutiny and criticism over the way it has treated the tens of thousands of migrant workers used to build the infrastructure.

So how sustainable is the Stadium 974 project? And where and when will the stadium be reused?

A glimpse of the future?Construction workers moved on to the site on 9 December to start disassembling Stadium 974

The 44,089-capacity Stadium 974 - located on Doha's waterfront - features a modular steel frame and multicoloured shipping containers, which can be seen from the outside of the stadium and house toilets and food and drink stalls.

It was the only stadium built for the World Cup without air conditioning, so hosted only evening matches, culminating in Brazil's last-16 victory over South Korea on 5 December.

The use of shipping containers and recycled steel helped reduce waste generated and construction time compared to the other new venues.

Qatar and designers Fenwick Iribarren Architects said they aimed to avoid building a "white elephant" - a venue left unused or rarely used after a tournament, as has proven the case following the three previous World Cups in Russia, Brazil and South Africa.

A report into Stadium 974 commissioned by Fifa and delivered by emission reduction experts also pointed to that benefit, and added it could allow stadiums to be built in more central and "easily accessible" locations, reducing "intra-city fan travel" during tournaments.

Organisers have also said they will donate 170,000 seats from across the other stadiums to developing countries to try to make them more sustainable and avoid them becoming underused in future. However, Carbon Market Watch said "no concrete plans could be found" for the distribution of these seats.

The claim the Qatar World Cup will be carbon neutral has also been described as "dangerous and misleading" by environmentalists, who say the tournament could have a carbon footprint three times higher than stated.

The importance of reuseWill the 2022 World Cup be carbon neutral?

Fifa's report compared the emissions produced by the building of Stadium 974 to the average emissions of the four permanent stadiums that have a similar capacity of 40,000-45,000.

It found the temporary stadium "initially emits more carbon emissions due to the use of carbon-intensive materials such as metal and steel" - as opposed to mainly concrete in permanent stadiums - which allows it to be dismantled and reassembled multiple times.

So, as it stands, Stadium 974 has a higher carbon footprint than the comparable permanent stadiums built for Qatar 2022.

For the temporary stadium to have a lower total footprint than multiple permanent stadiums, Carbon Market Watch said it "depends on how many times, and how far, the stadium is transported and reassembled".

Fifa's study assessed three different scenarios for the future of Stadium 974, in which it is reused once, twice or three times in a series of differing locations.

It found if the temporary stadium is reused only once, it must be relocated "within a total sea and road travel distance of 7,033km" to be more "environmentally advantageous" than building two permanent stadiums. It also highlighted the environmental benefits of the stadium being repurposed within the region, or specifically in Qatar.

All three scenarios were also modelled on the temporary stadium spending four years in the first location and in each subsequent location, before operating the remainder of a 60-year lifespan at its final destination.

Where is the stadium going?

No decision appears to have been made on the future uses or locations of Stadium 974.

Carbon Market Watch said while organisers have "highlighted the dismountable nature of the temporary stadium, we could identify no specific plans showing where the stadium will be moved, if at all".

There are reports that Stadium 974 could be sent to Uruguay,external-link which is set to be part of a joint bid with Argentina, Chile and Paraguay for the 2030 World Cup.

Uruguay is approximately 13,000km from Doha, so if the temporary stadium is moved there, it would have to be reused again in a third location in order to be more environmentally advantageous than building separate new stadiums in each place.

When asked about future plans for Stadium 974 and any possible locations, the organising committee said: "Qatar is on track to deliver the first carbon neutral Fifa World Cup.

"That means all infrastructure projects - including the eight stadiums - must meet stringent sustainability benchmarks.

"During their construction, we have recycled and reused wherever possible and implemented a vast range of energy and water efficiency solutions. In addition, materials from sustainable sources were used and innovative legacy plans have been implemented to ensure the tournament doesn't leave any 'white elephants'."

Obsessed with... SAS Rogue Heroes: Dive into the action behind the scenes of the epic dramaMatch of the Day Top 10: The greatest World Cup Games ranked