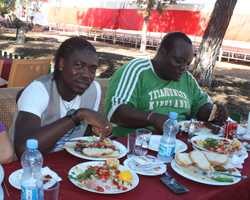 The 22-year-old moves on a season loan from French club Nice to gain more playing.

The loan deal was formalized well in time for the closing of the transfer window for this season.

Quartey has been left frustrated by the lack of playing at Nice which prompted his decision to seek the loan.

The lack of playing time has also affected his national team career as he has not been considered in recent matches.

Jonathan Mensah has taken his position as the substitute for the central defensive pair of Isaac Vorsah and John Mensah.

Quartey joined Nice from South African side Kaizer Chiefs but has not been given much playing time in the French league.

The move to Turkey will allow him to play more matches and fight for his position in the Black Stars.