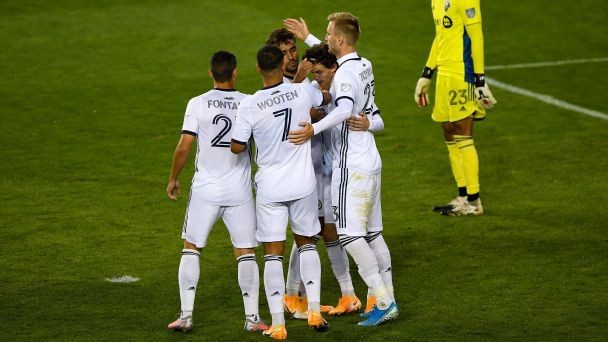 Kacper Przybylko scored on both sides of half-time and Alejandro Bedoya and Anthony Fontana also had goals as the Philadelphia Union took advantage of the Montreal Impact playing with 10 men most of the match to win 4-1 on Sunday night at Harrison, N.J.

This was technically a home game for Montreal, which has resumed regular-season play against MLS teams from the United States. However, the Impact has to play at least one home match in the United States due to coronavirus pandemic travel restrictions between the U.S. and Canada.

It seemed to feel like home right away for the Impact. On a free kick from just outside the top of the box, Romell Quioto drilled a strike through the Union's defensive wall and past a diving Andre Blake in the fifth minute for his sixth goal of 2020.

But 11 minutes later, Quioto was issued a red card for an obvious hard foul that left the Impact a man down. That's when Philadelphia took over en route to its third straight win and fifth in six matches to move into second place in the Eastern Conference.

In the 22nd minute, Philadelphia leveled the match through Bedoya's strike off a loft into the box that was brought down by teammate Andrew Wooten's chest. Right before half -- in the third minute of stoppage time -- Przybylko gave his team the lead, as he took advantage of a busy box to get to the ball into the net.

Just two minutes into the second half, Przybylko scored his seventh of the season off a clean cross from Brenden Aaronson. Fontana then scored his third goal in two matches off the bench, as Montreal just seemed to run out of gas and spirit on a night that started off on the right foot.

The Impact have dropped two in a row, conceding seven goals over those contests. Philadelphia, meanwhile, owns a 9-2 goal advantage during its three-game winning streak.