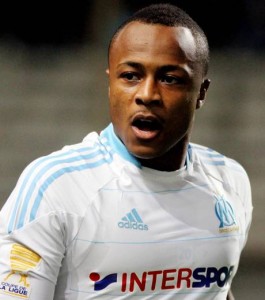 Racist behaviour by football fans in Russia is damaging the country's attempts to seek international respect for the increasingly big-money domestic game, ahead of its hosting of the 2018 World Cup.

A supporters' group for Russian champions Zenit Saint Petersburg provoked outrage this month by publicly urging the club not to sign any black players. Yet officials and clubs seem reluctant to acknowledge the scale of the problem.

The Russian Premier League has in recent seasons seen an unprecedented influx of foreign talent -- often from Africa or South America -- that has sharply raised its profile abroad.

But in scenes reminiscent of Britain in the 1970s, players from Africa and South America still face monkey chants and brandishing of bananas.

"Whenever we played Zenit and Spartak Moscow, they were constantly shouting 'ooh,ooh'. They were comparing me to a monkey," Liberian midfielder Sekou Oliseh, who plays for CSKA Moscow, told Sport Express daily.

Hardcore "Ultras" openly take part in an annual nationalist march although this year the Russian Football Union urged fans not to go.

This month, Zenit fan group Landskrona asked the club not to sign black or gay players or those from South America, apparently referring to star Brazilian striker Hulk and Belgian midfielder Axel Witsel, whose father originated from Martinique.

Zenit director of sports Dietmar Beiersdorfer swiftly insisted: "We make our player selections without any limitation regarding origin, religion or skin colour."

Yury Fedotov, head of Zenit's security service, reacted angrily when asked if racism was a problem.

"I categorically reject the message that racism is in any way characteristic of Zenit," he told AFP, criticising the media for blowing out of proportion the opinion of "a small group of fans."

But many felt officials did not go far enough.

"The manifesto is just another proof of complete anarchy in Russian football," wrote a commentator in liberal business daily Vedomosti.

"Unfortunately, the incident at Zenit once again shows, that the Russian FA still has a way to go in its fight against racism", FIFPro players' union spokesperson on anti-racism, Tony Higgins, said in a statement.

?If Russia wants to be the perfect host for the 2018 FIFA World Cup, then it will have to do its utmost to guarantee that players will not be racially abused."

Sports Minister Vitaly Mutko played down the impact of racism in football earlier this year.

"We have no out-and-out problems. Yes, there are incidents, but they are noted. Every one is investigated. The stadiums and the people who let them happen are punished."

Zenit was fined 300,000 rubles ($9,732) last year when a fan brandished a banana at Anzhi's Roberto Carlos, although the club claimed it was a misunderstanding.

"Someone shoved (the fan) from behind and to avoid dropping the banana, he held it through the railings," the head of Zenit's legal department, Pavel Pivovarov, told a recent roundtable on fan control.

Racists boo wealthy Anzhi -- based in the Muslim region of Dagestan -- not just over star striker Samuel Eto'o from Cameroon, but simply because they hate Russians from the North Caucasus.

At a Europa League group match in October, the director of Anzhi's legal department Mikhail Margulis said: "I saw how fans of other Moscow teams tried to destabilise it. They shouted nasty things, things against the Caucasus."

In December 2010, fans ran amok in central Moscow, beating up those from the North Caucasus after men from the region allegedly shot dead a Spartak Moscow fan in a fight. Twenty-nine were injured.

"I don't think that we have more or less of those racist elements," Alexander Meitin, the security chief of the Russian Football Premier League, told AFP.

"We have exactly the same problem as in England. All over the world this is an illness that the UEFA and the FA are fighting and issuing punishments for. We are not an exception."