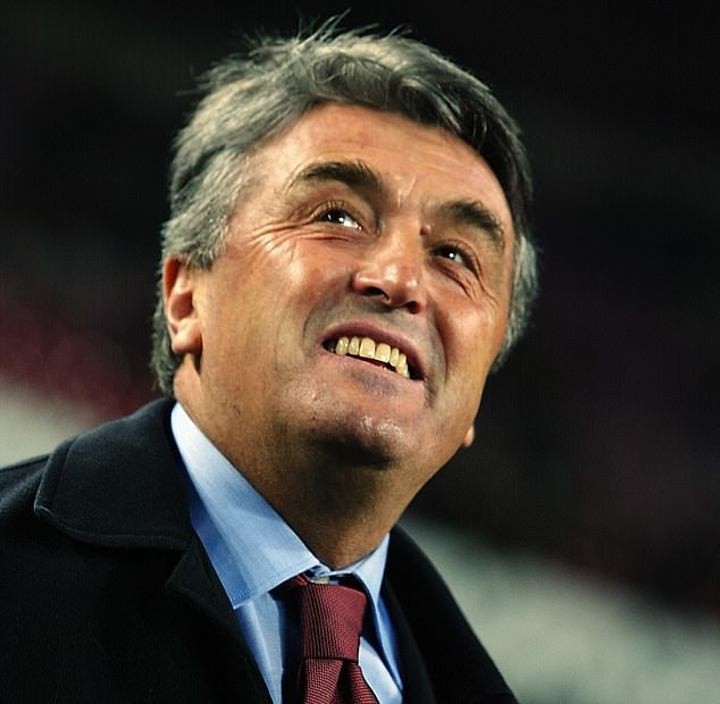 The Serbian coached Los Blancos between 1991 and 1992, occupied the Nou Camp dugout in 2003, but enjoyed most of his success during three spells with Atletico, winning the LaLiga and Copa del Rey double in the 1995-96 season.

Antic remains one of of only two men to manage El Clasico rivals Barca and Madrid, following in the footsteps of Enrico Fernandez Viola.

Fernando Torres worked with Antic at The Vicente Calderon, and he paid tribute on Monday, tweeting: 'Antic has left us, a man who dignified the profession of footballer, the history of our Atleti, champion and Rojiblanca legend because Radomir will always be in the hearts of all athletes.

'My condolences and all my encouragement to you family and friends.'

Meanwhile, Atletico chief executive Miguel Angel Gil said: 'With the loss of Radomir, we lost a bit of the club's heart.'

Antic won one Yugoslavia cap in a nomadic playing career, but will be best best remembered by British football fans for scoring a last-gasp goal to rescue Luton Town and condemn Manchester City to relegation in May 1983.

'Raddy' volleyed in the decisive goal with four minutes remaining on the final day of the season, prompting manager David Pleat to skip across the Maine Road pitch. It was a moment which BBC commentator John Motson described as 'an amazing act of escapology.'

On Monday, Luton tweeted: 'We are devastated to learn of the passing of Town legend Radomir Antic, at the age of 71. A true Hatters hero, for promotion and preventing relegation. The thoughts of all at Kenilworth Road are with his family and friends at this terribly sad time. Rest in peace, Raddy'.

Born in Zitiste, Antic represented Sloboda Uzice, Partizan Belgrade, Fenerbahce and Real Zaragoza before spending four years in Bedfordshire, retiring in 1984 after 17 years as a player.

He managed Real Zaragoaza, Real Oviedo, and Celta Vigo, and even led the Serbian national team between 2008 and 2010, finishing his career in China.

Sergio Ramos is the latest of a host of players to pay homage. He tweeted: 'You made Atleti bigger, you made our rivalry bigger. Goodbye to a unique career: Atletico, Barca and Real Madrid among others. RIP.'