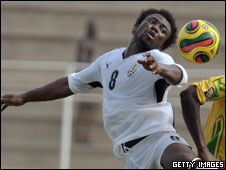 Ayew has struggled for first-team football since joining the Cairo giants before the start of last season.

He used to make substitute appearances under coach Henri Michel in the first half of last term but rarely made the bench after Hossam Hassan succeeded the Frenchman.

Ayew was part of Ghana's squad for the 2010 World Cup but did not make any appearance at the South Africa finals.

"He was not fit to play last season and we had no time to prepare him," Ibrahim Hassan, the twin brother of coach Hossam, told Modern TV.

"But Hossam sat down with him and told him that he could still feature with Zamalek this season.

"We asked him to lose weight and be physically prepared to return to action."

Hassan also said that Ayew might be deployed as a right-back, a position that none of Zamalek players could admirably occupy.

Ahmed Ghanem, who is currently nursing an injury, and Omar Gaber have failed to impress as right-backs so far this season.