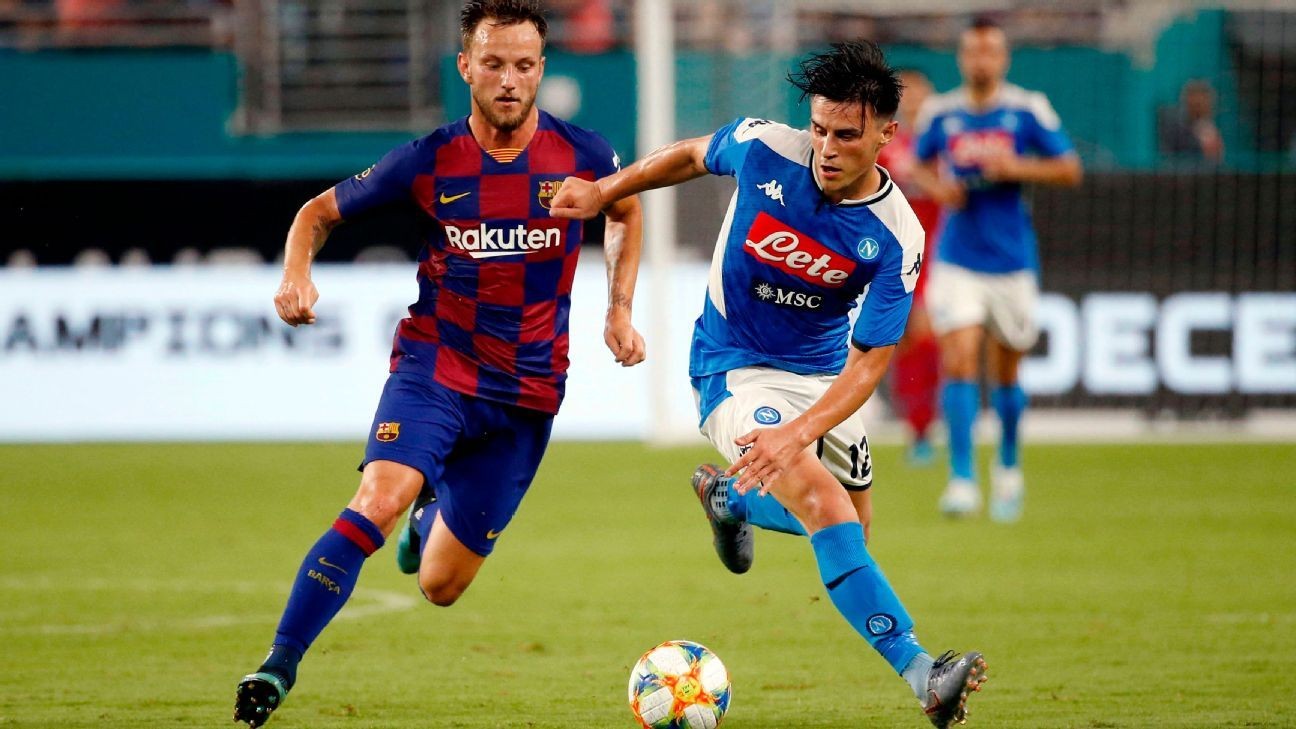 Ivan Rakitic's second-half goal earned Barcelona a 2-1 win against Napoli on Wednesday as the Italians were made to pay for missing a string of chances at the Hard Rock Stadium.

Rakitic fired home from the edge of the box with 10 minutes remaining to give Barca the advantage in the inaugural La Liga-Serie A cup. A Samuel Umtiti own goal had earlier cancelled out Sergio Busquets' opener. The two sides meet in the second leg in Ann Arbor on Saturday.

With Lionel Messi ruled out of Barca's U.S. tour with a calf injury, Ernesto Valverde named Luis Suarez and Antoine Griezmann in the same attack for the first time since the Frenchman signed earlier this summer. Apart from that, though, the Barca coach picked an experimental side including B team players Riqui Puig and Carles Perez.

Napoli, who don't kick off their league campaign until Aug. 24 against Fiorentina, looked the better side in the first half. After Griezmann had drawn a decent stop from Alex Meret and Suarez had fired over, the Italians began to exploit the weaknesses in the Barca backline.

Barcelona beat Napoli in the first of two U.S.-based friendlies between the clubs. RHONA WISE/AFP/Getty Images

Lorenzo Insigne should have scored but was denied by a fine Neto stop, before Dries Mertens then drew another save from the goalkeeper before sliding wide at the far post.

But it was Barca who took the lead. Perez and Moussa Wague had both had chances when Junior Firpo, making his debut for the club, broke down the left and fed Puig, who set up Busquets to open the scoring with a caressed finish from the edge of the box.

The Napoli reply was immediate in front of the 57,062 crowd in Miami. Former Real Madrid forward Jose Callejon got the better of Junior and his goal-bound effort was turned into his own net by Samuel Umtiti. Barca improved after the break in an open game full of chances. Meret saved from Abel Ruiz and Rafinha then shot wide before Barca made four changes, with Ousmane Dembele coming on for an eclectic cameo. Within 60 seconds he had hit the post.

Arkadiusz Milik was then denied by another great Neto save and then headed over with the goal gaping.

Napoli's chances had been better more regular but it was Barca who nicked the win when Rakitic hammered home his second goal of preseason from the edge of the box after a Ruiz shot had been deflected.

There was still time for Neto to make another save and Dembele to cause all sorts of problems with his pace, brought down once when clean through and just missing with two good chances, but there were no more goals.

Saturday's game could be more competitive as both teams edge closer to the start of the new campaign. It represents Barcelona's last friendly of the summer and will be Valverde's last chance to try things out before the La Liga curtain-raiser against Athletic Bilbao next weekend.