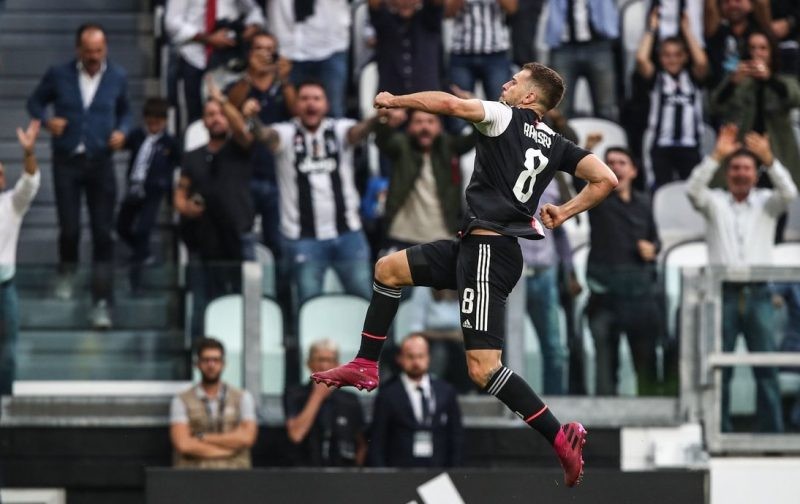 ALLIANZ STADIUM (TURIN) – Juventus got their title defence back on track on Saturday, coming back from a goal down to defeat Hellas Verona 2-1.

Maurizio Sarri’s side could only manage draws in their last two matches against Fiorentina and Atletico Madrid, and it appeared they were set to drop further points when Miguel Veloso put the away side ahead in the 21st minute.

However Aaron Ramsey’s equalizer in his first start for Juve levelled the score, while Cristiano Ronaldo netted from the penalty spot to make sure Gianluigi Buffon’s first start for the club since May 19, 2018 ended in a positive fashion. It all kicked off after Juventus penalty appeals were waved away, as the Allianz Stadium was silenced when Verona were awarded one just moments later. Samuele Di Carmine was taken down by Merih Demiral, only for the Italian to step up and stamp his effort off the post.

Darko Lazovic’s follow up smacked the crossbar but Juventus failed to clear the lines, which allowed Miguel Veloso to fire from distance and into the top corner to give the away side the shock advantage.

The lead lasted just 10 minutes however as Ramsey unleashed a shot from distance, and his effort deflected off Koray Gunter to leave Marco Silvestri with no chance.

Things went from bad to worse for the German defender after the restart as he couldn’t keep pace with Juan Cuadrardo’s sprint into the box, and his tackle resulted in a spot-kick for the away side that Cristiano Ronaldo calmly fired home.

Juventus controlled much of the play after taking the lead, but Verona showed they had no interest in backing down either. Mattia Zaccagni fired a dangerous strike on goal, only for Buffon to expertly palm away the attempt.

It was very nearly 2-2 in the 69th minute when Veloso’s free-kick was poorly cleared by Buffon. The ball remained in the six-yard box and Di Carmine fired in hopes of levelling the score, but Demiral got his body in front to cancel out the danger.

Buffon – who was playing in his 902nd career match, putting him level with Paolo Maldini – saved the result in the 89th minute, brilliantly parrying Lazovic’s thumping strike before Veloso’s follow-up clipped the outside of the post.

There was enough time for Marash Kumbulla to pick up a second yellow after bringing down Blaise Matuidi just outside the box. Ronaldo’s attempt came back off a Verona defender before referee Federico La Penna ended proceedings.