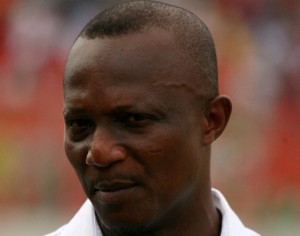 Ghana under 23 management committee head Randy Abbey has extolled the qualities of head coach Akwasi Appiah and sees him a future asset.

Appiah, who doubles as Ghana national team assistant coach, guided the Olympic team to the final of the 2011 All Africa Games following a 1-0 success over defending champions Cameroon on Wednesday.

The coach's plan nearly suffered a jolt after losing striker Benjamin Acheampong and midfielder Malik Akowuah to injuries two days to the start of the competition.

But the ex-Asante Kotoko captain has built a team that looks set for a gold medal against South Africa in the final on Sunday.

Abbey, a former spokesperson for the Ghana Football Association, insists he has earned his vote and proven to be a competent coach.

"I will say coach Akwasi Appiah has done extremely well and seriously I have learnt a lot from him," Abbey told Oman FM.

"His tactics worked to perfection and I think he is one coach we must really take a closer look at. The boys did well despite the circumstances and weâ€™re grateful for our victory."

Cameroon and Senegal will battle for bronze on Saturday.