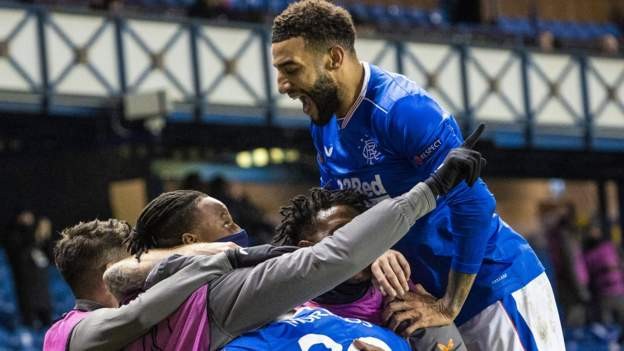 Rangers reached the Europa League last 32 for the second successive season, with a game to spare, after fighting back twice to defeat Standard Liege.

Steven Gerrard's side, so strong defensively this term, conceded from crosses on two occasions before the break when Maxime Lestienne, then Duje Cop, breached Allan McGregor's goal.

Connor Goldson's header, then a James Tavernier penalty, had Rangers on terms at the interval, before Scott Arfield's second-half strike ensured the win that keeps them top of the section.

Gerrard's team travel to Poland to face Lech next Thursday knowing they will win Group D if they match Benfica's result against Standard.

Only a win would do for the Belgian visitors, who travelled to Ibrox with two wins from their previous 10 games.

And they were rewarded for a positive start after Cop beat Goldson on the left before guiding a low cross into the box for Lestienne to finish neatly.

Rangers just could not get into the attacking flow that had been key in guiding them to a 23-match unbeaten start to the campaign, as Standard continued to press and pose a greater threat.

However, as the game approached the half-hour mark, the hosts began to show signs of finding their rhythm.

But just 46 seconds after getting themselves back into the game, Rangers found themselves behind again as Collins Fai's inch-perfect delivery from the right was bundled in by Cop, who clattered into the back post in the process.

The hosts responded well as Arfield lashed a volley over before Kemar Roofe's strike struck a hand in the Standard box, allowing Tavernier to convert his ninth spot-kick of the season just before the break.

Similar to the first period, the Belgian outfit were the brighter of the two in the opening stages of the second half as Allan McGregor - setting a news record of European appearances for Rangers - saved well from close range after Abdoul Tapsoba was slipped through on goal.

However, with the best move of the game, Rangers would take the lead for the first time as superb build-up resulted in Kent crossing low from the left to find Arfield steaming into the box to smash home from 12 yards.

The goal sparked the hosts into life, and they could have won the game by more if it not for some outstanding saves from Bodart in the Standard goal.

The goalkeeper was forced into a series of fantastic stops from free-kicks by Tavernier and Barisic, before saving another Goldson header and a close-range effort from Roofe.

The win extends the Ibrox club's unbeaten run to 24 games and next Thursday they have the opportunity to top the group if they can match second-placed Benfica's result.

Man of the match - Scott ArfieldArfield has been a vital cog in Gerrard's side this season, and this was on show again on Thursday as the 32-year-old smashed home the winner and was a constant option in linking the midfield and attackMatch stats

Rangers have lost just one of their last 22 home matches in Europe, including qualifiers (W15 D6). Standard have lost four of their five Europa League group stage games, having lost just four of their previous 16 (W6 D6 L4). Rangers conceded the opener in a home game for the first time this season, in their 12th game.12 of the last 15 goals Rangers have conceded in all competitions have been in Europe. Tavernier has scored 15 goals in his last 19 matches for Rangers - eight more than any other player. There were just 100 seconds between Goldson's equaliser and Cop making it 2-1 to Standard.

Collins Fai (Standard Liège) is shown the yellow card for a bad foul.

Merveille Bokadi (Standard Liège) wins a free kick in the defensive half.

Kemar Roofe (Rangers) is shown the yellow card for a bad foul.

Noe Dussenne (Standard Liège) wins a free kick in the defensive half.

Attempt missed. Leon Balogun (Rangers) header from the left side of the box is high and wide to the left. Assisted by Borna Barisic with a cross following a corner.

Missed Industry?: Fast-living, expensive exploits and fallouts await in this hit new dramaBarack Obama Exclusive: The former president on his cautious optimism for the future and more