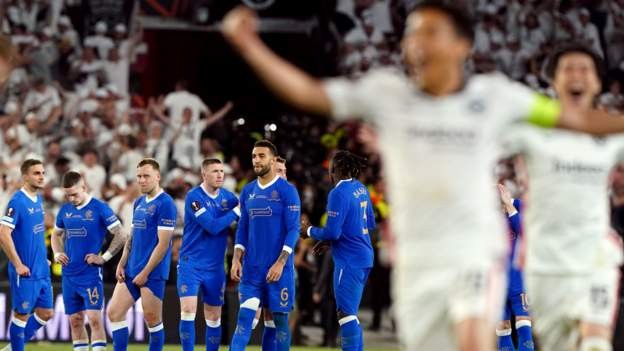 Rafael Borre crashed in the decisive spot kick after Aaron Ramsey was denied just moments earlier in front of a colossal Rangers support in the Ramon Sanchez Pizjuan Stadium.

Those fans had been euphoric when the Scots took the lead through Joe Aribo's ice-cool second-half finish in the sweltering cauldron in Seville.

However, Borre detonated raucous scenes in a jam-packed Eintracht end 12 minutes later as he steered in a soft equaliser to send this energy-sapping contest to extra time and penalties.

And Rangers' players crumpled to their feet as the 11th-placed side in the Bundesliga prevailed in the shoot-out, executing five composed penalties to claim their second European trophy and a place in next season's Champions League group stages.

Under a humid Spanish sky, this one seemed written in the stars for Rangers. Their only previous win in Spain came in the 1972 European Cup Winners' Cup final, when the Barca Bears stormed past Dynamo Moscow for their first European trophy.

The pilgrimage to Seville in the hope of repeating the feat of Jardine, Stein, Greig and Johnstone was a long and arduous one.

It started in the Champions League qualifiers against Malmo last summer for the players and for the men, women and children who spilled into Seville from the four corners of the world to support them. This was their chance to see the class of 2022 become immortal, and over 100,000 made the trip in hope and expectation.

Well before kick off, the ground swarmed with light blue. An original allocation of just under 9500 looked fanciful when the sides entered to a cacophony so loud it could wake the dead.

Around two thirds of the stadium swayed, rocked and roared with Scots, leaving their German counterparts and their flag display looking a little humble. Frankfurt were brighter on the pitch, though. They were quick and aggressive, while Rangers appeared nervous.

James Tavernier had flashes on the right, but the intensity which stung Dortmund, Braga and Leipzig was missing. Ansgar Knauff drew a tremendous save from Allan McGregor, then Djibril Sow went close as the German fans raised the noise level in appreciation.

Rangers retaliated through Aribo. Time stopped dead as he wrapped his foot around the ball on the edge of the D. The sight of it flashing by the far post by a foot will race through his mind for a while yet.

Both teams exchanged jabs before Rangers, who survived a VAR penalty scare courtesy of a rash Connor Goldson lunge, landed an incredible blow.

Football may be a game of tactics, money and talent, but at times it can offer up the inexplicable. There's little explanation for Sow's flopped header towards his own goal. Or the stumble from Tuta which allowed Aribo to bustle in on goal.

The Rangers fans held their breath before bursting into life as the ball hit the net after a low finish. Giovanni van Bronckhorst punched the air and roared into the night sky.

Rangers were in control now and that will make the anguish of defeat hurt so much more. The slap in the face came just 12 minutes later, Borre stealing in between Connor Goldson and Calvin Bassey to force home a teasing but cheap cross.

Extra time beckoned as Eintracht went for a knockout blow, but Rangers - and their support - roused themselves and should have won it two minutes before penalties.

Substitute Kemar Roofe charged to the goal-line and his deflected cutback fell for Ryan Kent with the goal gaping, but Kevin Trapp's save expelled a giant gasp from the crowd. Tavernier's arcing free-kick in the dying seconds was also palmed away.

Ramsey was a late edition to the match with penalties in mind. The on-loan Juventus man had the opportunity to make it 4-3 in the shootout after Tavernier, Steven Davis and Scott Arfield slotted Rangers' first three kicks, but the Welsh midfielder's tame effort down the middle was whacked away by Trapp.

It would be the only miss of the shootout, as Rangers' marathon run in Europe came to the most agonising of ends in a flurry of white bedlam.

Man of the match - Calvin BasseyCalvin Bassey was a hero for Rangers in Seville and througout this campaign. He didn't deserve to be on the losing sideWhat does this mean?

The golden glitter was still falling from the winners' podium as Rangers' players remained sat on their hunkers inside an emptying stadium.

The haunted look on the face of McGregor - in what might even be the final game of his career - told its own story. This was the cruellest of endings on what should have been the closing chapter of their finest ever moment.

The teams beaten along the way, and the manner in which they were dealt with, made this run iconic and at times defied logic. Reality went out the window as Borussia Dortmund were stormed past. Braga were overcome in extra-time drama. And the Ibrox roof nearly crashed in on itself as RB Leipzig were put to the sword.

This one will sting, given the game was in their hands after Aribo's opener. Eintracht, who knocked out Barcelona and West Ham, threatened to wilt under the pressure. Rangers had them, but the door was left open.

The spurned chances at the death of extra time also offer a cruel pang of "what if" to the punched gut of emotions that will be churning its way through the Rangers team as their flight heads home on Thursday.

In time, that will subside and they will rightly focus on the pride of a team from Scotland making it to a European final from so far back. It's an incredible feat.

Yet, with the Scottish Cup final in just three days, there will be little time for Van Bronckhorst's side to salve the sting of this one.

Eintracht become the first German team to win the Uefa Cup/Europa League since Schalke in 1996-97.It is their second major European trophy, 42 years after winning the Uefa Cup against Borussia Monchengladbach.This was Rangers first shootout defeat in Europe since the 1999-00 Uefa Cup (v Borussia Dortmund in the round of 32).Rangers had four shots on target in the second half of extra time - double the amount they had in the first 105 minutesAribo's goal was his first in the Europa League this season. He became just the second Nigerian player to score in the final of a major European competition, after Alex Iwobi in the 2019 Europa League. McGregor became the oldest player to feature in a Uefa Cup/Europa League final (40y 107d). Meanwhile, he's just the third player aged 40+ to play in a major European final, after Dino Zoff in the 1983 European Cup (41y 86d), and Edwin van der Sar in the 2011 Champions League (40y 211d).

Penalty saved! Aaron Ramsey (Rangers) fails to capitalise on this great opportunity, right footed shot saved in the centre of the goal.

Goal! Eintracht Frankfurt 1, Rangers 1(1). James Tavernier (Rangers) converts the penalty with a right footed shot to the centre of the goal.

Attempt saved. James Tavernier (Rangers) right footed shot from outside the box is saved in the top right corner.

Aaron Ramsey (Rangers) wins a free kick in the attacking half.

Ryan Kent (Rangers) wins a free kick in the attacking half.