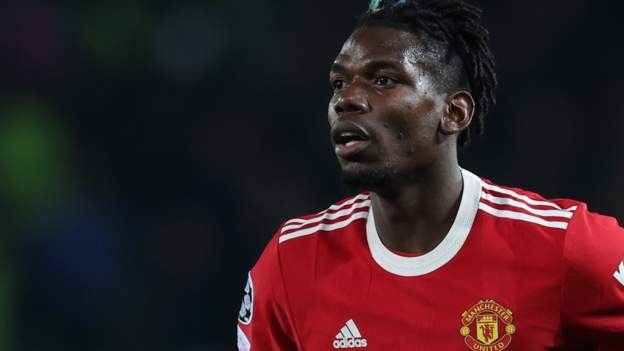 Interim Manchester United boss Ralf Rangnick says he will continue to play Paul Pogba - even if the France midfielder is only motivated by a transfer away from the club.

Pogba returned to training on Monday after injuring his thigh in November.

The 28-year-old's contract at Old Trafford runs out at in the summer and he has been linked with a move to Paris St-Germain.external-link

Rangnick says Pogba wants to show fans "what kind of player he can be".

German Rangnick added: "Even if it's for only showing up for a new contract elsewhere, I mean, he will be highly motivated to do that. Why should I then not play him?"

Rangnick hopes Pogba will be ready to play in the FA Cup fourth round tie against Middlesbrough on 4 February and said he does not know what stage the Frenchman's contract talks are at.

"By the way, my contract as a manager is also expiring in the summer," Rangnick pointed out.

Sancho has 'a lot of different things in his head'

The 21-year-old completed a £73m move from Bundesliga side Borussia Dortmund in July and Rangnick says he could be finding it tough in the "more physical" Premier League.

"He also played for one of the biggest clubs in Germany, in Dortmund, but I think in total, the whole league, the whole competition is more physical and the level of expectation is higher.

"I think it's also got to do with a lot of different things in his head. Whenever I see him train, he's showing that he's one of the best players in the training sessions.

"But now it's about the transfer to when he's playing and showing the same kind of level and performance on the pitch."