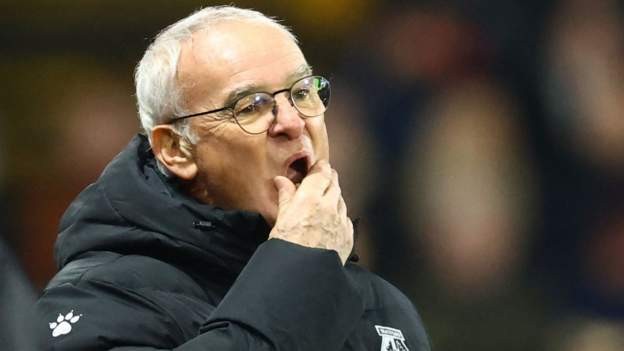 Claudio Ranieri says he needs to choose players that want to "fight hard for Watford" after a damaging defeat against Norwich saw them drop into the Premier League relegation zone.

Norwich picked up a 3-0 win to move out of the bottom three for the first time this season and send Watford into it.

The Hornets have suffered 11 defeats in 13 games under Italian Ranieri.

"It's very important the lesson Norwich gave us, they played as a team, we played as individuals," said Ranieri.

Reaction to Norwich's win over WatfordFootball Daily Podcast: All over for Ranieri?Ranieri wants players to 'fight' for Watford

The 70-year-old veteran was furious with his players after a result that sees them fall to 18th place following a run of seven defeats and one draw in their past eight games.

He told BBC Sport: "I want to say sorry to our fans because we wanted to do something better. We asked the players to light the fire and we can't lose this match, but after the goal we disappeared.

"I believe in my reaction and the players' reaction. It is not possible to continue in this way because this way we go straight into the Championship. I want the players with heart and mentality who play for the team.

"I speak every day with the board and we are all together. I believe in these players, the players who want to believe. Who doesn't want to believe - go home."

'We have to react immediately'

Victory was Norwich's fourth from 22 top-flight games this season, but means they have now collected three points in back-to-back games after beating Everton last time out.

The Nigerian is the club's top scorer this season with eight goals but will miss the crucial match against bottom of the table Burnley after the international break.

Ranieri said: "Maybe we played better 10 v 11. That is no good. Now I have to choose the players that want to fight hard for Watford. You have to play 11 v 11.

"We have to react immediately."

'I'm not worried about the future'

Ex-Chelsea manager Ranieri stunned English football by leading Leicester to an unthinkable title triumph in 2016, but he was sacked by the Foxes the following season.

A nomadic career has since seen him go on to manage Nantes, Fulham, Roma and Sampdoria, before he was appointed as Watford boss in October on a two-year deal, replacing sacked Spaniard Xisco Munoz.

Ranieri was the 14th managerial change under the club's owners, the Pozzo family, since they took over in 2012.

"I'm calm and want to react - me and my players. I have the passion, I want players with the heart and to think about what is Watford for the people of Watford."

Asked if he is confident of turning it around, Ranieri replied: "Yes I'm very confident."