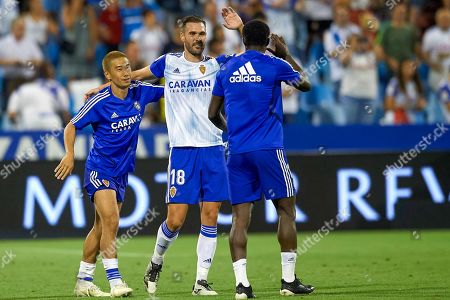 Dwamena has quickly settled in at the La Romareda Stadium outfit since joining on a season-long loan from LaLiga side UD Levante in the summer transfer window.

The 23-year-old had to wait for his fourth game of the league to open his account for the Whites after bagging an impressive 11 goals during the side’s pre-season training.

Dwamena’s first competitive strike for the club was well orchestrated by Japanese star Shinji Kagawa, who joined the club in the summer from Borussia Dortmund.

The duo together with Colombian forward Luis Suarez are the driving force behind the Victor Fernández’s men superb start to the season.

The Zaragocista attack machinery is well oiled, with Shinji displaying his exquisite quality and providing balls to Dwamena and Suarez, chances are assured.

Despite the Japanese not being at 100% fitness, he continues show a high level performance in games.

Suarez has also shown he has that fighting capacity, a lot of verticality and a good range of movements to compliment the work efforts of the two aforementioned players.

The triple threats have scored five out of the seven league goals Zaragoza have amassed this term.

Real Zaragoza are sitting 2nd on the Spanish Segunda Division standings with 10 points from 4 matches.