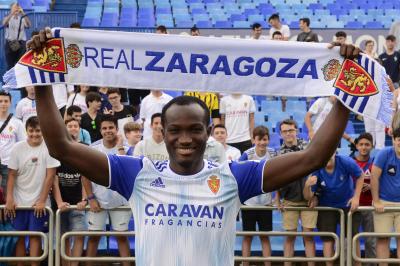 The former FC Zurich attacker joins the Los Blanquillos on a season long loan from La Liga side Levante.

Dwamena struggled to establish himself with the Valencia based club but believes his move to Zaragoza will earn him the opportunity to rediscover his form.

"I think the Second Division is harder and harder, I decided to come here to enjoy playing football," he said at his first press conference.

"But for me the most important thing is that I am here with the team, to work together very hard because we have to get to the top and I think that's all we have to work for," he added.

"I do not care if I play in First or Second, the challenge is the same, work hard with the team."

The 23-year old will travel with his new teammates to Boltana for preseason, and says he is ready for the new challenge.

"Life has its ups and downs and we have to accept the challenges it brings in. Last season was not as expected but I think that is part of football. Real Zaragoza to enjoy playing football and to give the best of me for the Club," he said.