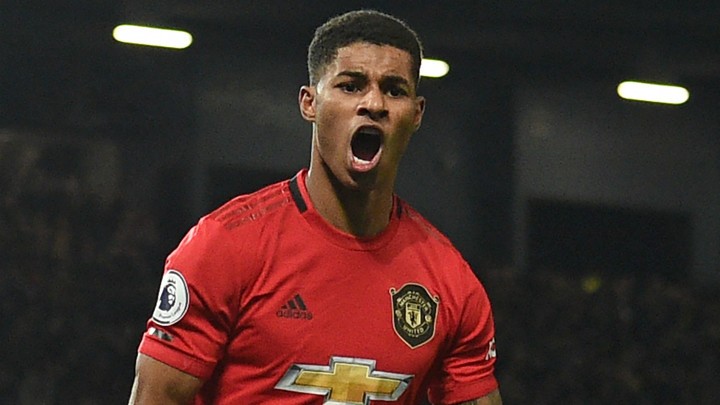 In a parallel universe Manchester United’s season would have just come to an end and excitement would be building around Euro 2020 and the prospects of Gareth Southgate’s England squad.

Rashford had played through the pain barrier and was desperate to carry on especially given his goal tally this campaign – 19 in all competitions – but after hobbling off against Wolves in January scans confirmed the worst and the 22-year-old was ruled out for months. But as he joined the rest of team-mates at the club’s Carrington training base for the first time last week he was nearing the end of a long battle.

“I have sort of had my head down. It has been a tough period for me, the last few months, obviously being injured,' Rashford told the club website.

But Rashford hasn’t let his injury get him down and his dedication and commitment goes beyond his day job. He’s used a significant amount of his time in lockdown not just focusing on his fitness but working out how to give back and help during the pandemic.

Rashford didn’t need to respond to the public shaming by Matt Hancock, the Health and Social Care Secretary, when he suggested footballers should be giving financially to help the battle against Covid-19.

Instead, Rashford was, unprompted, already thinking and planning things himself. Back in March, the 22-year-old announced he would become an ambassador of FareShare, a project which helps feed schoolchildren and those in need during the pandemic.

Earlier this week, Rashford confirmed 2.8 million children a week were benefitting from meals provided by the money people had donated through the scheme and he was given a recognition award from the High Sheriff of Greater Manchester, a proud achievement for him and his family.

But rest assured, Rashford has been just as focused on his return from injury. His driven mentality has helped him get to where he is now and the last 10 weeks have been no different.

Before the 2017-18 pre-season tour, he underwent an extreme training programme at the Nike World Campus in Portland, Oregon, to ensure he was in the best possible condition to push into the starting XI on a regular basis.

He has been known to regularly examine YouTube videos of the likes of Cristiano Ronaldo, Lionel Messi and Wayne Rooney in order to improve. He still regards himself as a student of the game despite being a regular fixture in United’s first team.

He may be in the middle of his best-ever goal-scoring season but he still knows he has to improve.

“I have just been getting my head down and working,” Rashford said about his recovery at home. “I am privileged enough to have the equipment I need at home so it is not much different for me as I do a lot of work at home anyway, so I am just staying indoors and making sure I am eating right.

“For me, motivation is always quite simple. It changes as time goes on, but now that everything outside the pitch is sort of dealt with, I can just focus on myself and improving myself. That is my motivation every day. Regardless of whether we are stuck inside or not, that doesn't change.”

Those are words that should be welcomed by both manager Ole Gunnar Solskjaer and fans alike; there’s clearly more to come for the young England man.

He’s improved under the tutelage of the Norwegian and is on track to double his previous best goal tally of 10 in the Premier League. While training harder and longer has helped his technique, it’s his studying of the game that has helped develop his instinct and that will continue to improve over time through experience.

“A lot of the things he (Solskjaer) is speaking about are instinctive,“ Rashford said. “S,o it's not necessarily something that you work on it, it's just recognising certain pictures. If someone else is shooting, it's instinct to follow in. You don't practise that out on the [training] pitch but I think you get a lot of that from speaking to him.”

The suspension of the Premier League due to Covid-19 has given Rashford a chance to set personal records that would not have been possible had it carried on with him on the treatment table. He’s already surpassed his previous personal best of 14 goals in all competitions and he’s taken on the goal scoring burden of United’s failure to sign a replacement for Lukaku.

He had shown before his injury he is more than capable of being United’s talisman and the restart of the Premier League gives him another opportunity to show why he’s one of the most exciting young attacking talents around.