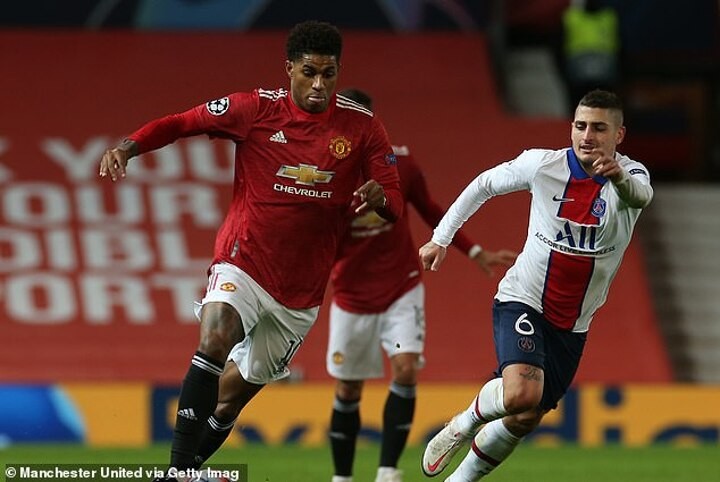 Marcus Rashford is racing against time to be fit for Manchester United’s trip to West Ham as he continues to struggle with a shoulder problem.

Rashford sustained the injury at Everton last month and aggravated it in Wednesday’s Champions League defeat to Paris Saint-Germain at Old Trafford.

The England forward trained with the rest of his teammates at Carrington on Friday morning, but not ‘fully’ according to manager Ole Gunnar Solskjaer who remains hopeful Rashford will be available to play West Ham at the London Stadium on Saturday evening.

‘Marcus has been training this morning, not fully but he joined in with the group,’ said Solskjaer.

‘His shoulder stopped him finishing the (PSG) game so he’s been getting treatment and hopefully he’ll be part of the squad that travels. We’ll see after training.

‘Luke (Shaw) is not ready yet, but apart from that we had a big squad training again.’

The United manager is looking forward to playing in front of a crowd – albeit of a West Ham persuasion – as the Premier League begins to welcome back supporters.

‘It will be great playing in front of fans,’ said Solskjaer. ‘We won't have our fans there so we’ll have to use the energy and thrive off the home fans and make them quiet and edgy.

‘It's great to see fans back in a stadium. Hopefully we'll get them back at Old Trafford soon.’