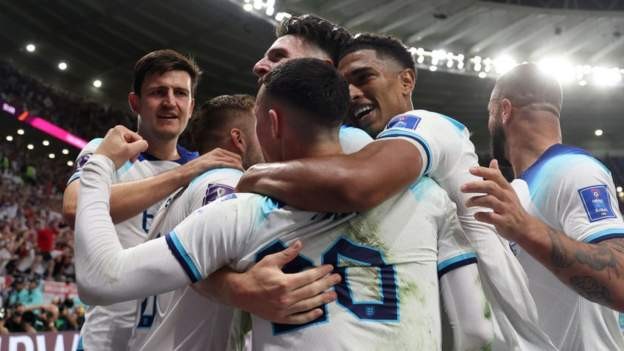 Marcus Rashford inspired England to the victory required to top Group B and ensure it was despair for Wales as they went out of the tournament after a bitterly disappointing World Cup campaign.

Wales needed to either beat England and hope Iran and USA ended in a draw or pursue the more unlikely outcome of running up a four-goal victory margin at Ahmad bin Ali Stadium.

England, who now face Senegal in the last 16 on Sunday (19:00 GMT), ensured neither scenario was ever a serious consideration as they dominated throughout and took full control after an uneventful first 45 minutes.

Wales manager Rob Page was forced to replace Gareth Bale at half-time because of an injury, although the great talisman had only had seven touches in an anonymous display.

And any hope of Wales qualifying for the last 16 was wiped out as England scored twice within six minutes of the restart.

Marcus Rashford fired a free-kick past Danny Ward following Ethan Ampadu's foul on Phil Foden after 50 minutes, with the Manchester City midfielder then marking his return to England's team moments later by turning in Harry Kane's cross at the far post.

Wales were demoralised and outclassed as they knew they were on the way home from Qatar and Rashford added his second in the 68th minute, with a large slice of help from Wales keeper Ward who allowed a fierce shot to slip through his legs.

England top Group B with seven points, two points ahead of the United States who set up a last-16 meeting with the Netherlands by beating Iran 1-0 in their grudge match.

It took England time and a desperately dull first half before they clicked into top gear but once they did they were then able to overrun Wales, who ended this World Cup in timid fashion.

And Rashford continued to make a big impact at this World Cup, with his double here coming after scoring with virtually his first touch in the 6-2 romp against Iran in England's opening game.

He missed a good chance in the first half when he was played though by Kane but his free-kick was emphatic and the second a reward for his willingness to drive into the Wales defence at pace. He almost had a hat-trick only for Ward to block his shot at the near post.

Rashford must now be under serious consideration for a starting place when England face the tough test of Senegal as the knockout phase gets under way.

It not only helped England run out easy winners but gave squad members valuable game time, especially Walker, who is such an important part of Southgate's plans but missed the end of the Premier League to undergo groin surgery.

England and Southgate have achieved their first priority of qualifying for the last 16 while topping their group, two strong wins against Iran and Wales coming either side of that dismal USA showing.

It represents a job satisfactorily done by England - now they must take the next step against the dangerous African champions.

Wales slip quietly out of Qatar

Wales arrived in Qatar with real pride after qualifying for their first World Cup since 1958 but they must reflect on a poor campaign after England confirmed the formality of their elimination.

Page's side have always relied heavily on the inspiration provided by Bale and Aaron Ramsey but the two great figures of this fine era for Welsh football found this World Cup a step too far, with those around them simply not of the quality to make up for that deficit.

Bale's only meaningful contribution was the penalty that earned a draw against USA in their opening game but he contributed nothing in the damaging loss to Iran and was little more than a passenger in his 45 minutes against England.

Ramsey was no better and while the duo's magnificent contribution to Wales can never be under-estimated the brutal truth is that their lack of match sharpness left them unable to exert their usual influence on games.

Now the question is whether they will carry on with their international careers - or whether their country moves on without them.

It had the feel of the end of an era for Wales here on Tuesday. It is an era that has brought much joy, and was appreciated by their outstanding support after the final whistle, but this was a desperate anti-climax after reaching their first World Cup for 64 years.

Attempt blocked. Phil Foden (England) left footed shot from the centre of the box is blocked. Assisted by Jack Grealish.

Callum Wilson (England) wins a free kick in the attacking half.

John Stones (England) hits the bar with a left footed shot from the centre of the box following a corner.

Jack Grealish (England) wins a free kick in the defensive half.

John Stones (England) wins a free kick in the defensive half.

Callum Wilson (England) wins a free kick in the defensive half.

Attempt missed. Kieffer Moore (Wales) right footed shot from outside the box is high and wide to the right. Assisted by Ethan Ampadu.

Attempt missed. Rubin Colwill (Wales) right footed shot from outside the box is high and wide to the right.

Kieffer Moore (Wales) wins a free kick in the attacking half.