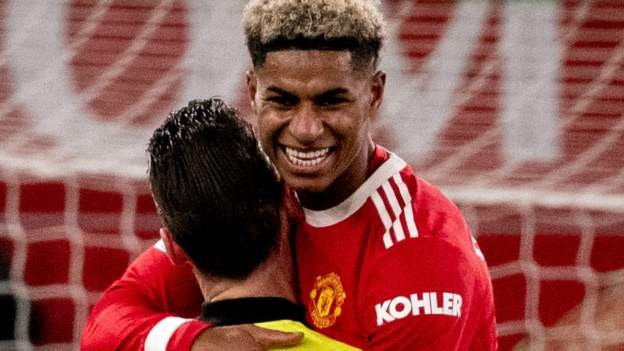 The jubilant "Fergieee timeeeee" celebration posted on Marcus Rashford's Twitter feed half an hour after the final whistle in Manchester United's last-gasp Premier League victory over West Ham at Old Trafford neatly encapsulated the mood of the day.

This felt like a big win for United - following on from Wednesday's 3-1 victory at Brentford.

It was a difficult game, against dogged opponents who were able to pick something close to the team that got them into the top four, and who benefitted from a week's rest compared to United's two days.

A game that entered its final minute of injury time seemingly certain to end goalless, until Rashford arrived at the far post to turn home Edinson Cavani's low cross.

The goal sparked an outpouring of emotion that fans were still enjoying long after the final whistle.

It has been a hard season at Old Trafford. A memorable win against West Ham will not solve all their problems. But at least it will allow them to enter the international break feeling good about themselves.

The same could also be said for Rashford himself.

Until his strike against Brentford in midweek, Rashford had not scored since the end of October - a run of 11 matches and his longest drought since 2016-17.

Those close to the 24-year-old had accepted a lack of confidence had materialised and were urging him to go back to basics, to adopt the approach that brought him acclaim in the first place; run at opponents with his electric pace and take them on.

After the season he has endured, the social media post on Saturday was almost as much a personal cry of joy as the one he released in real time as he ran away to celebrate his match-winner.

It now means Rashford has scored in successive Premier League games for the first time since December 2020.

The way he hunted down his chance on Saturday was the kind of predatory move that has not always appeared instinctive to a player who prefers to play on the left and cut in, rather than play through the middle as an orthodox number nine.

Ralf Rangnick has not quite found the best way to use Rashford's blistering pace and eye for goal. But he is certain the forward is a major weapon to have at his disposal.

'It's all about confidence'

"He is one of the top strikers in England, an England international who regularly played in the Euros," the interim Manchester United manager said.

"He has almost everything a modern striker needs. He's got the pace, skills, he's got the size and physicality of a striker.

"In the end, it's all about confidence for strikers. I'm pretty sure those two goals will have raised the level of confidence with Marcus, and now it's about taking steps.

"I think he can play a very important role for the rest of the season for us."

Rashford's five goals in 17 games since his return from shoulder surgery is still a way off the level of his returns of 22 and 21 from the previous two seasons.

However, with a break of nearly two weeks before the FA Cup fourth round tie against Middlesbrough on 4 February, he has some time to work with Rangnick to become the most effective version of himself.

Rashford has proved he can be a top-class striker. But as he moves into the next phase of his career, from youngster to a seasoned professional with almost 300 senior United appearances under his belt, he needs to show he is a winner to be fully appreciated at a club where winning trophies used to be an annual event.

After four seasons without silverware, Rashford has declared himself up for the challenge.

"Winning a game like that is the best feeling in football," he told MUTV.

"Obviously the result is good for our confidence but the biggest thing for that is winning games.

"We still have a lot to play for. We want to do our best to get hands on a trophy.

"As long as we keep doing our best on the pitch, we should keep picking up results because we have the quality to win games."