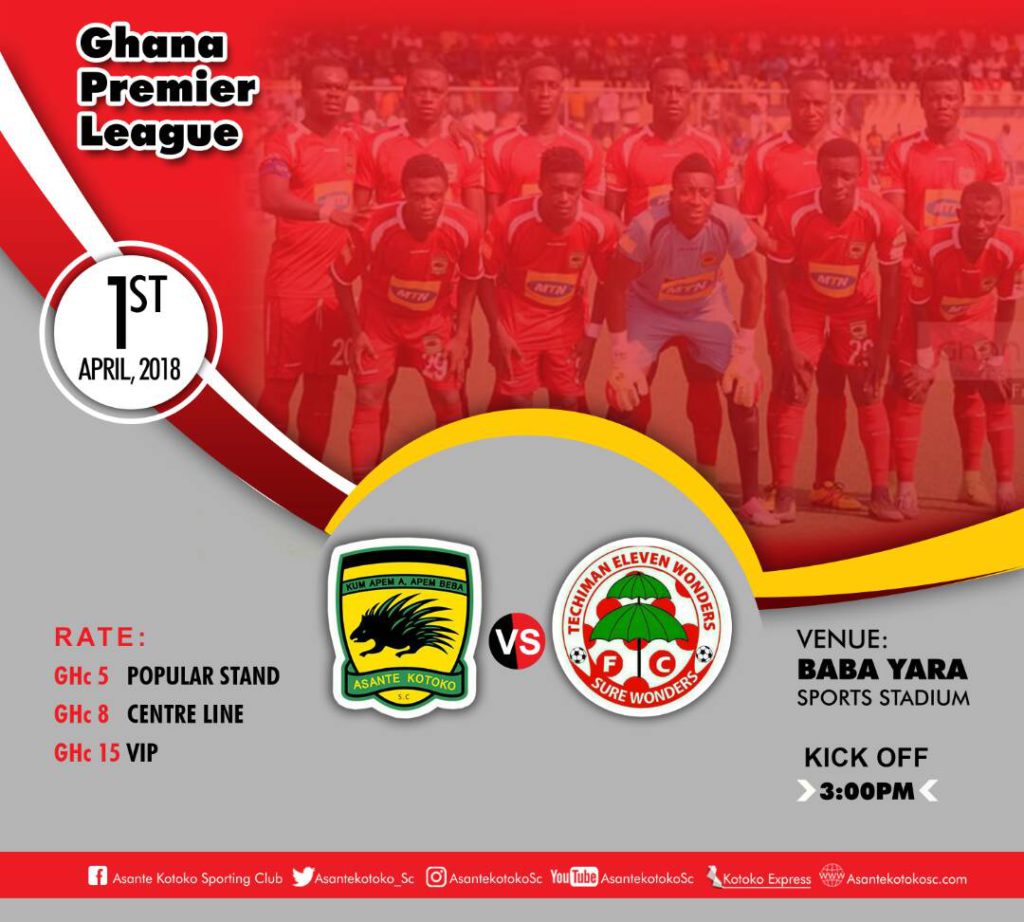 Follow the LIVE play-by-play of the clash between Asante Kotoko and Techiman Eleven Wonders at the Baba Yara Sports Stadium on GHANAsoccernet.com as the Ghana Premier League gathers storm.

Hello good afternoon and welcome to the LIVE coverage of the Ghana Premier League Week IV as Asante Kotoko take on newly promoted side Techiman Eleven Wonders as well as updates from other league centers .

The league week iv of the league started on Saturday with Bechem United sharing points with AshGold in a 1-1 stalemate while Elmina Sharks bounced back to shock WAFA with a 2-0 win.

Below are the matches for today: 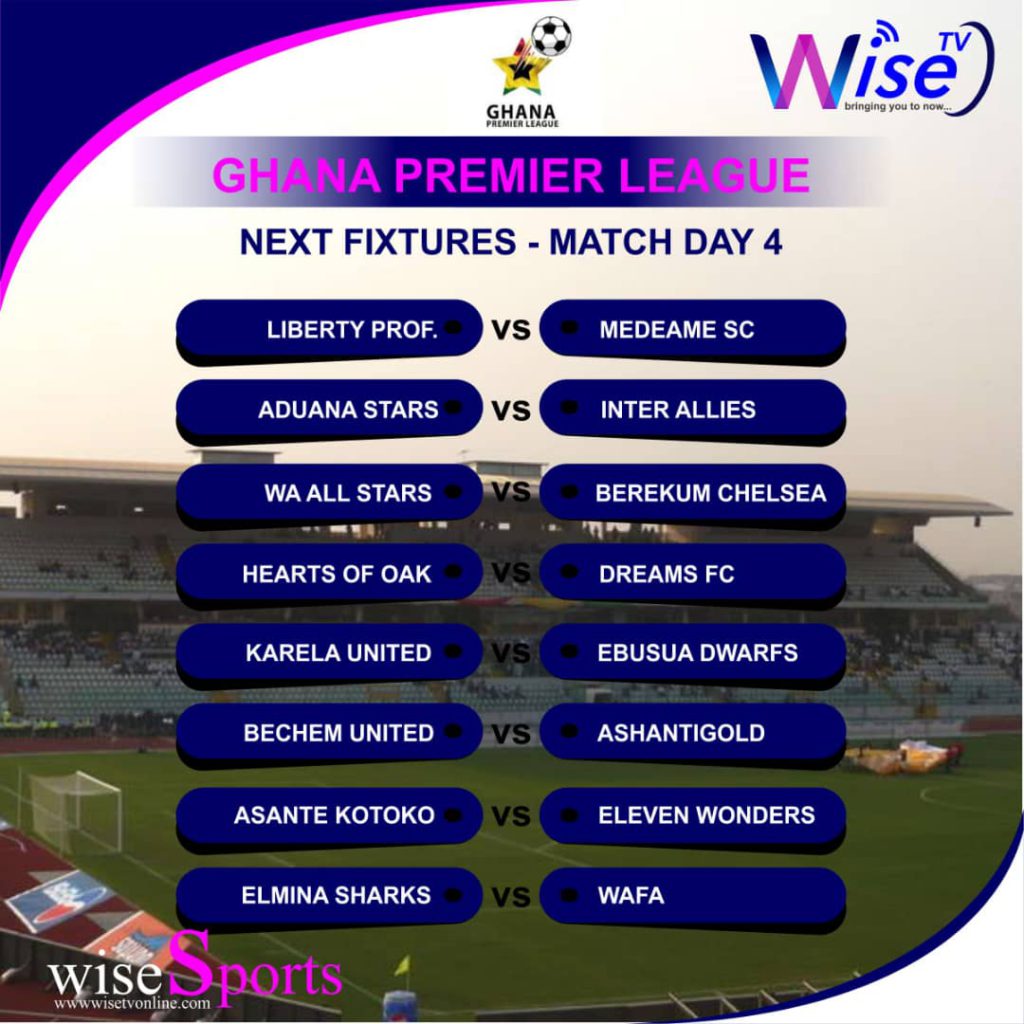 Referee Wiseman Ghansah has blown his whistle for the start of the game between Asante vs Eleven Wonders.

2'- Asante Kotoko have however, taken hold of the game and are pressing for an early opener

3'- Jordan Opoku is lying on the deck with a suspected injury. Referee Ghansah has called for medical attention for the veteran midfielder.

4'- The game has resumed. Kotoko are putting their passes together nicely but are not pushing enough to take the initiative.

5'- Referee has whistled for a foul for Asante Kotoko.

7'- Ooooch! Kotoko nearly opened the scoring after Mawuli Osei headed Jordan Opoku's lofty free kick but the ball could only crush into the cross bar.

GOOOOOAL! Karela FC have opened the scoring in Anyinase against Ebusua Dwarfs. Midfielder Diawisie Taylor is the scorer for the league newcomers.

Welcome back to the Baba Yara Sports Stadium

10'- John Moosi to effect a goal kick for Eleven Wonders.

13'- Kotoko have been kept at bay by the resilient Techiman side. They have limited the Reds to playing in their own half.

GOOOOOOAL! Yahaya Mohamed has given Aduana the lead against Inter Allies.

Back to the Baba Yara Sports Stadium

19'- Mawuli Osei nearly put Kotoko ahead after outwitting two Eleven Wonders defenders but his final shot is far off target.

GOOOOOOOOAL! Yahaya Mohammed has made it 2-0 for Aduana Stars in Dormaa.

*But we are hearing some red card issue for Inter Allies goalkeeper Kwame Baah..We update you with the development.

23'- Eleven Wonders should have had a lead by now but there again they have fluffed their lines in a one-v-one situation with Felix Annan.

25'- Referee Ghansah has awarded a contentious free kick for Kotoko but Mawuli Osei couldnt take advantage of the situation as his fierce shot goes straight into the abdomen of Emmanuel Kwamena. The game has been temporary halted as Kwamena is being attended to.

Welcome back to Kumasi

33'- The Red fans are expressing their frustrations with their team's display.

Penalty miss! Yahaya Mohammed has spurned a penalty in Dormaa. The striker with three goals in his bag could add to his tally.

40'- Wahab Adams has been shown the first yellow card of the game after his clumsy tackle on Eleven Wonders striker.

GOOOOOOOAL! Hearts of Oak have shot into the lead against Dreams FC through Patrick Razak.

45+2'- Referee Wiseman Ghansah has brought the first half to a close.

Techiman Eleven Wonders has done a yooman's job at the Baba Yara Sports Stadium by holding the Reds to a goalless draw, and not just because of the draw - they created all the clear cut chances that came in the game. Kotoko failed to trouble the league newcomers with the possession-style play.

We'll be expecting more from the two sides in the second stanza as other centres have produced far more entertainment than the Baba Yara Sports Stadium.

Welcome back from the break.

But before that...news coming from Dansoman suggest that Liberty are down by 1-0 via Kwame Boateng's 40th minute strike. Liberty Pros 0-1 Medeama SC.

45'- Eleven Wonders have started the match as wounded lions.

55'- Play has been temporary halted as John Moosi is wailing on the turf.

58'- Substitution for Kotoko as Obed Owusu comes on for Mawuli Osei.

63'- What a chance for Kotoko but Daniel Darkwa could not keep his shot down as Eleven Wonders survive the scare.

64'- Substitution for Kotoko as Baba Mahama comes on for Akwesi Ntim.

70'- Substitution for Eleven Wonders as Kwadwo Amoako comes on for Kweku Adu.

72'- The Porcupine Warriors have controlled the game well but solid defending from Yakubu Mohammed has curtailed their attack.

74'- Emmanuel Gyamfi should have put Kotoko ahead but his powerful shot goes over the bar.

77'- What a save by John Moosi...Seth Opare hit the ball well but the agile keeper is there to thwart the shot. The former Berekum Chelsea keeper has been superb this afternoon. However, he's called for medical attention after making the save.

GOOOOOOOAL! Inter Allies concede another goal in Dormaa against Aduana Stars. The goal was scored by Nathaniel Asamoah.

84'- GOOOOOOOOAL! Asante Kotoko has broken the deadlock in Kumasi via Jordan Opoku.

GOOOOAL! Benjamin Eshun has pulled parity for Liberty Professionals at the Carl Reindhorf Park. So, it's Liberty Pros 1-1 Medeama SC.

90'- Kotoko are searching for the cushioning here as they press their opponents into their half.

*Reports from Dansoman indicate that Liberty Professionals' Bright Andoh has had a penalty saved by goalkeeper Eric Antwi. It's all over at the Carl Reindhorf Park.

90+3' Daniel Darkwah will not be a bad choice for the Man of the Match accolade because he was a thorn in flesh of their opponents.

Move the train to the Cape Coast Sports Stadium where Hearts of Oak are leading Dreams FC by a goal to nil.

72-' Dreams are mounting pressure on Hearts of Oak but goalkeeper Benjamin Mensah is proving to be the difference between the two sides.

74'- What a chance for Daniel Kordie...he should done better after being set up by Joseph Esso in the penalty box. His powerful shot flies off the bar.

76'- Substitution for Hearts of Oak Evans Quao is coming on for Isaac Mensah.

81'- Hearts of Oak are not giving Dreams FC any breathing space after switching their formation to 3-5-2. It's making things difficult for the Dawu-based side to penetrate through the middle.

85'- Substitution for Hearts. Selassie Bakai comes on for Malik Akowuah.

87'- Superb last-ditch defending by Robert Addo. Hearts of Oak are living dangerously now as Dreams FC attack them at every given opportunity.

90'- Godfred Kwadwo Asamoah has been adjudged the most valuable player in the match. He has been fantastic this afternoon.

90+2'- Dreams FC have a corner...can they do something with it? Ben Mensah has grasped the ball.

It's over at the Cape Coast Sports Stadium. Hearts of Oak have pipped Dreams FC 1-0.