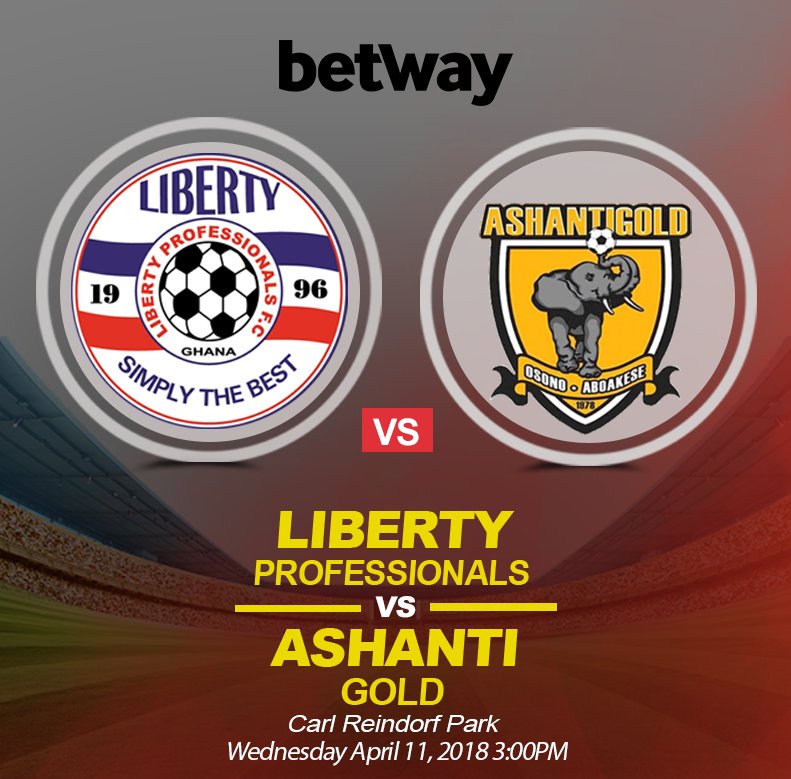 Follow the LIVE play-by-play of the clash between Liberty Professionals and AshGold from the Carl Reindorf Park as well as updates from other league matches in the Week VI fixtures of the Ghana Premier League on GHANAsoccernet.com

Hello good afternoon and welcome to the LIVE coverage of the Ghana Premier League clash between Liberty Professionals and AshGold as well as updates from other league centers as the league hits week six.

Liberty Professionals have won just two of their last six fixtures in the premier league.

Ashanti Gold SC are undefeated in their last six games in the premiership. They are the only unbeaten side this season.

Liberty Professionals have recorded only one loss in their last six home matches in the premier league.

Ashanti Gold SC have been able to win only one of their last six away matches in the premier league.

Ashanti Gold SC have won two of their last five visits to Liberty Professionals in the premiership.

Liberty Professionals have managed to keep only one clean sheet in their last seven home games in the premiership.

Ashanti Gold SC have conceded in each of their last six premier league matches as the visitors.

1'- The Liberty Professionals game have delayed a bit so we are starting with the Hearts of Oak v Wa All Stars game.

2'- The Phobians are showing glimpses of their form against against Dwarfs here in Week 3 as they attack the Northern Blues with pace and purpose.

13'- The visitors are having a difficult time here in Cape Coast as they are failing to swing two passes together. They are crumbling under the pressure the hosts are piling on them.

14'- Referee Timothy Obuobisa has awarded a free kick to Hearts of Oak on the edge of the area...can the Phobians take advantage of the situation?

17'- Hearts had a chance to open the scoring but Joseph Esso was given a nudge hence lost balance before releasing a feeble shot.

22'-Goooooooal -What a strike by Selasi Bakai for Hearts of Oak. Hearts 1-0 Wa All Stars

Goaaaaal- There is a another at the Baba Yara Sports Stadium.. we are hearing it's Asante Kotoko who are leading by 1-0 courtesy Obed Owusu. Kotoko 1-0 Ebusua Dwarfs.

- There is a penalty awarded to Aduana Stars in Dormaa against regional rivals Techiman Eleven Wonders.

Sam Adams has converted the spot kick to hand the Fire Boys the lead.

We move over to the Baba Yara Sports Stadium:

24'- Kotoko are controlling the pace of the game with ease as they are making their opponents chase shadows.

Goaaaaaal- WAFA have opened the scoring in Sogakofe against Medeama SC.. we will bring you the scorer's name soon.

27'- Joseph Tagoe nearly leveled the score line for Dwarfs with a fierce shot on the edge of the area but the ball goes just wide.

28'- Dwarfs are growing in confidence as they are attacking with freedom after conceding the goal but they're not allowed to penetrate their opponents defense.

Gooooooal- Tanko Mohammed has broken the deadlock for Elmina Sharks against Inter Allies at the Ndoum Stadim.

Hearts of Oak are reported to have been awarded a penalty..

Gooooooal - Hearts of Oak are up by 2-0 courtesy Joseph Esso..Red card has been shown to Wa All Stars defender Ishahaku Issah.

There is another goal at Sogakofe.. The report indicate that Medeama SC have restored parity against WAFA via Justice Blays strike.

Goooooooal.. Two quick goals at the Nana Gyeabour Park in Bechem as Sharani Zuberu has leveled the scoreline for Dreams FC against Bechem United after Hafiz Konkoni gave the hosts the lead.

Back to the Baba Yara Sports Stadium;

42'- Oooch! Kotoko nearly doubled their lead but goalkeeper Danso Mensah grasped the ball without any worry.

45'- Joe Tagoe is slowly becoming a thorn in the flesh of Asante Kotoko with his enterprising play this afternoon. Anytime he gets the ball, he goes pass two, three Kotoko players before releasing. Class is permanent after all.

The games from the all the centres have been brought to a close.

Scores at glance in the aftermath of the first half:

Hearts of Oak 2-0 Wa All Stars

Welcome back from the break:

Finally we are here in Dansoman.

Liberty Professionals were protesting for a penalty kick but the referee has waved it off.

Wa All Stars have been awarded a penalty in Cape Coast..can they reduce the deficit?

Goooooooal -Kingsley Osei Effah has beautifully converted from the spot. Hearts of Oak 2-1 Wa All Stars.

Gooooooal! Ebusua Dwarfs have equalized via Solomon Okudzeto's strike. It was coming due to the performance they exhibited at the end of the first half. Kotoko 1-1 Dwarfs.

Another goal in Sogakofe...Shockingly it's Medeama who have taken the lead there... WAFA 1-2 Medeama SC.

Dwarfs are brimming with confidence now as they are looking dangerous now.

Goooooooooal...Eleven Wonders have reduced the deficit via Salifu Cisse's header after capitalizing on a defender mishap from the hosts defense. Aduana 2-1 Elven Wonders.

Goals are flowing from all the centres..There is another one in Dormaa as Hafiz Adams gives the hosts a 3-1 lead.

Let's go back to Kumasi as there is lots of pressure on the Porcupine Warriors to clinch maximum points today.

75'- Albert Gaisie has been given his marching orders for Dwarfs after two bookable offence.

79'- Following the red card, Kotoko are now controlling the pace of the game as their opponents have resorted to defensive tactics.

Gooooooool! Aduana Stars are cruising to another victory in Dormaa after Gideon Kyeremeh capitalized on a goalkeeping error.

Goooooal in Kumasi..Frederick Boateng gives the hosts the lead after being put through by Obed Owusu.

In Cape Coast, referee Timothy Obuobisa has brought the game between Hearts of Oak and Wa All Stars to a close. Hearts won by 3-1.

Gooooooal! The virginity of the game at the Carl Reinhorf has been broken as Liberty Professionals take the lead against the round of play through Elvis Kyei Baffour.

There is an unfortunate situation in Kumasi as Dwarfs midfielder Paul Abakah is wailing on the deck with a suspected broken leg.

96'-Free kick fro Kotoko.. can they add up to their tally?

Oh no! Prince Acquah shoots straight into the human wall. There is no time to take the rebound as the referee whistles to end the game.

Scores at glance from all the centres:

Hearts of Oak 3-1 Wa All Stars