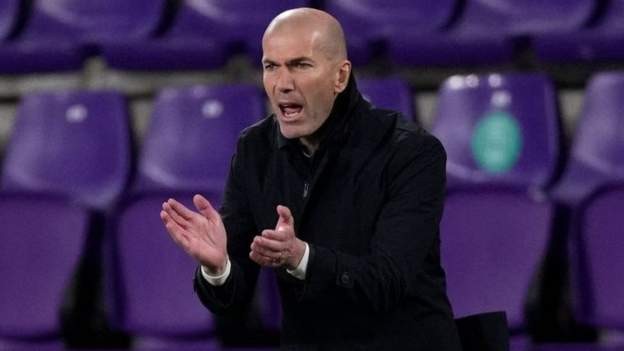 Zinedine Zidane says he is not willing to risk players when Real Madrid visit Atalanta in the Champions League last 16 amid a growing injury list.

Top-scorer Karim Benzema was one of nine Real players to miss Saturday's 1-0 win at Real Valladolid with injury and has not travelled to Italy.

The 13-time European champions have only 11 fit senior players for the first leg in Bergamo on Wednesday.

"Maybe we would if it was the Champions League final or the last game of the league season with the title on the line, but there's a long way to go."

Eden Hazard, Sergio Ramos, Dani Carvajal and Marcelo are also among those who will miss the first knockout game.

Atalanta coach Gian Piero Gasperini says his side, who reached the quarter-finals last season, remain wary of the threat posed by the Spanish giants.

"We can't change our characteristics, which allowed us to reach the Champions League and be competitive in Italy," said Gasperini.

"We won't change the team, but we have to be attentive and take some precautions. We want to challenge the absolute best teams and we feel in the right condition to give it our best shot.

"Real Madrid are transformed in the Champions League. I don't believe much in their absences, you can take away the talent, but the Real team seen in these last few weekends was a more humble side, which is a quality."

This is the first competitive encounter between Atalanta and Real Madrid. In fact, Atalanta's only previous meeting with a Spanish side in European competition was in last season's round of 16 when they faced Valencia - they won 8-4 on aggregate.

Atalanta are the first team since Sevilla (2007-08 & 2009-10) to reach the knockout stages of the Champions League in each of their first two appearances.Atalanta are the only remaining side in this last 16 yet to win a single home game in the Champions League this season (D2 L1).None of Atalanta's 15 Champions League games has ended goalless. Since last season, their matches have produced 53 goals (27 for, 26 against), an average of 3.5 per game.70% of their goals in this season's group stages were scored in the second half (7 out of 10), the highest percentage among the 16 teams left in the competition.Defender Cristian Romero made more interceptions than any other player in this season's group stage (24). He also won the most aerial duels (33) among players left in the competition.Despite not taking a single penalty, striker Duván Zapata set the highest Expected Goals tally in the group stage (4.28 xG). He notably had nine 'big chances' (scoring from three of them), also the best tally in the group phase.

Real Madrid have won each of their last five Champions League away games against Italian opposition (12 goals for, 1 against) - they'd only won three of their previous 16 trips to Italy.They have also found the net in each of their last 19 matches against Italian teams, with the last side to stop them from scoring being Juventus in November 2008 (0-2).Real have reached the knockout stages for the 24th consecutive season, the longest such run in the history of the competition. The last time they failed to make the latter phase of the tournament was in 199-/97 - it was also the last season in which they didn't feature in any European competition.Since making his debut in the competition, striker Karim Benzema is one of two players to have scored 10+ goals with his head, 10+ with his right foot and 10+ with his left foot - the other is Cristiano Ronaldo. He's scored five goals in his last six knockout games, after netting only one in his previous 18.Zinedine Zidane has prevailed as Real Madrid manager in 12 of his 13 Champions League knockout ties (nine home/away ties and three finals), with the only exception coming against Pep Guardiola's Manchester City in last season's round of 16.