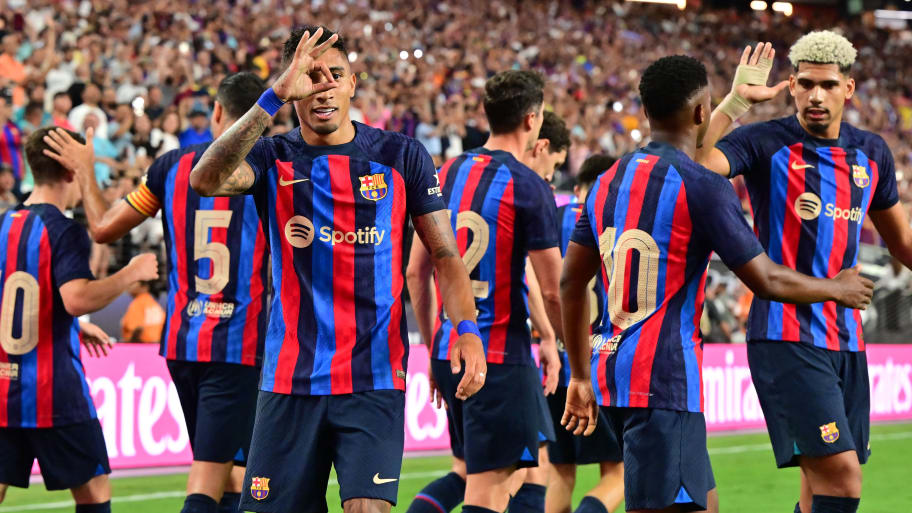 Barcelona claimed pre-season bragging rights over fierce rivals Real Madrid thanks to a single goal from new signing Raphinha in a Clasico friendly in Las Vegas.

Barça and Real went head to head in front of 61,000 at the Allegiant Stadium in the famous American city, a game which also saw Robert Lewandowski make his unofficial debut for the Catalans.

Both teams named strong lineups, showing the full depth of their respective squads. But Barcelona were already two games into their pre-season schedule ahead of this one, with Real back on the pitch for the first time since the Champions League final, and it showed.

Although each saw similar amounts of the ball, it was Xavi’s side who used it better, creating more chances and actually testing Thibaut Courtois in the Real goal. Going the other way, Los Blancos failed to muster a single attempt on target, missing the mark with all nine of their efforts.

While Real remained without talisman Karim Benzema, Barça fans excited about Lewandowski got to see 45 minutes of the Pole in action and he even had the first real chance of the game.

Raphinha, playing in his second Barça match following a recent transfer from Leeds, scored in the 27th minute, proving decisive. The Brazilian winger collected the ball just outside the penalty area and lashed an unstoppable shot into the top corner.

The rhythm of the game was disrupted by mass substitutions in the second half, yet just before half-time there was a spicy reminder that even in pre-season there is still animosity and competitive rivalry between the club as a scuffle broke out.

Real will now continue their pre-season in San Francisco with a game against Mexican giants Club America, while Barcelona head to Dallas to face Juventus.