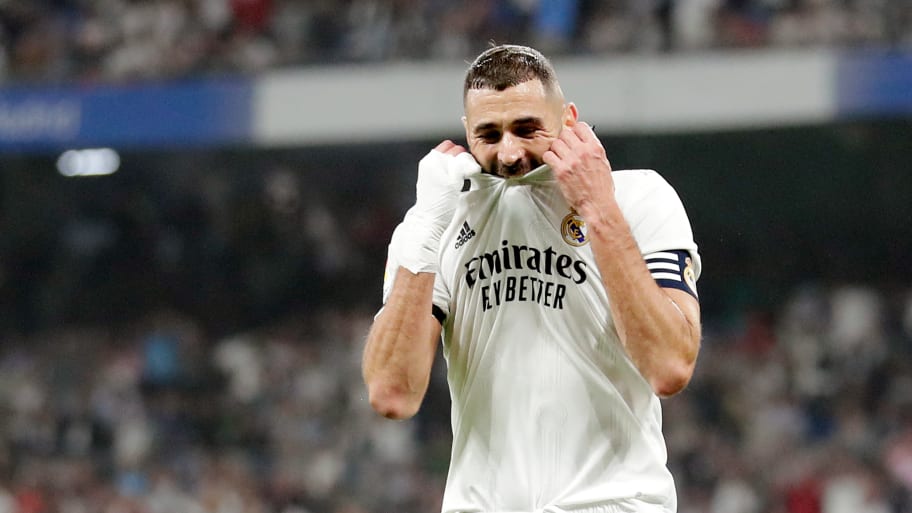 Karim Benzema missed a penalty as Real Madrid were frustrated by a ten man Osasuna at Santiago Bernabeu.

The visitors took a shock lead in the first half before Vinicius Junior hit back for Real Madrid. Benzema was then gifted a glorious chance to win the game for his side, but hammered the ball off the crossbar - missing his third consecutive penalty kick against Osasuna goalkeeper Sergio Herrera.

Real Madrid dominated possession early in the game, with Dani Carvajal and Ferland Mendy's overlapping runs causing problems for the Osasuna backline, but it was actually the visitors who'd create the first real chance of the game. That chance would fall to Nacho Vidal who, finding himself completely unmarked and in acres of space on the right of the penalty area, was unable to direct a subsequent volleyed effort anywhere near the goal.

It was a much, much better chance than his shot made it look.

Los Blancos pushed forward thereafter, getting the ball to Vinicius Junior with ever-increasing frequency. And the Brazilian would win a free-kick on the left flank which very nearly turned into a goal on the half hour mark.

Toni Kroos whipped a dangerous ball into the box which was met by Antonio Rudiger who, rather disappointingly, ballooned his free header on goal way, way, way wide of the post. File under 'better chance the player made it look' alongside Vidal's volley.

While Real Madrid were pressing into the final third, gaps were appearing in their defensive third - gaps which Osasuna so nearly exploited with a quick counter attacking following a Los Blancos' corner kick. The visitors steamed forward, working the ball well up the park, and finding Abde Ezzalzouli on the right of the penalty area. The ex-Barcelona man's effort on goal however span just wide of the left post.

Osasuna were made to pay for missing that chance in the 42nd minute when Vinicius Junior finally broke the deadlock. The forward's whipped cross from the left flank went right the way through, past Benzema and Rudiger, and into the bottom corner of the net.

The visitors weren't to be deterred by that concession and in the 50th minute they grabbed an equaliser. The goal came from Kike Garcia, who flicked an Unai Garcia cross over Andriy Lunin and into the back of the net.

Rodrygo would spurn a decent chance to re-take the lead 10 minutes later, firing over the crossbar after being played through on goal by Benzema.

After a frustrating 15 minutes in which Osasuna defended well, Real Madrid were gifted a chance to go ahead after Benzema was pushed over in the penalty area by David Garcia - who received a red card for the foul. Up stepped Benzema to take the resulting spot kick and he, rather shockingly, cannoned the ball off the crossbar instead of into the back of the net.

A minute later Benzema did have the ball in the back of the net, but he was adjudged to have been offside when he latched onto the ball int he penalty area.

The last chance of the game would fall to substitute Mariano Diaz, who headed a great Federico Valverde cross just over the bar.

CB - Antonio Rudiger - 5/10 - Missed a decent chance in the first half. Not quite on the same wavelength as Alaba yet.

LB - Ferland Mendy - 6/10 - A solid outing for the French international.

CM - Aurelien Tchouameni - 4/10 - Slightly sloppy on the ball at times. Not his greatest outing.

RW - Rodrygo - 6/10 - Missed a decent chance on the hour mark. Much more involved in the second half than he was in the first.

ST - Karim Benzema - 2/10 - He missed his third penalty in a row against Sergio Herrera.

SUB - Eduardo Camavinga - 5/10 - Much better than Tchouameni when he came on.

This article was originally published on 90min as Real Madrid 1-1 Osasuna: Player ratings as Benzema misses penalty in draw.