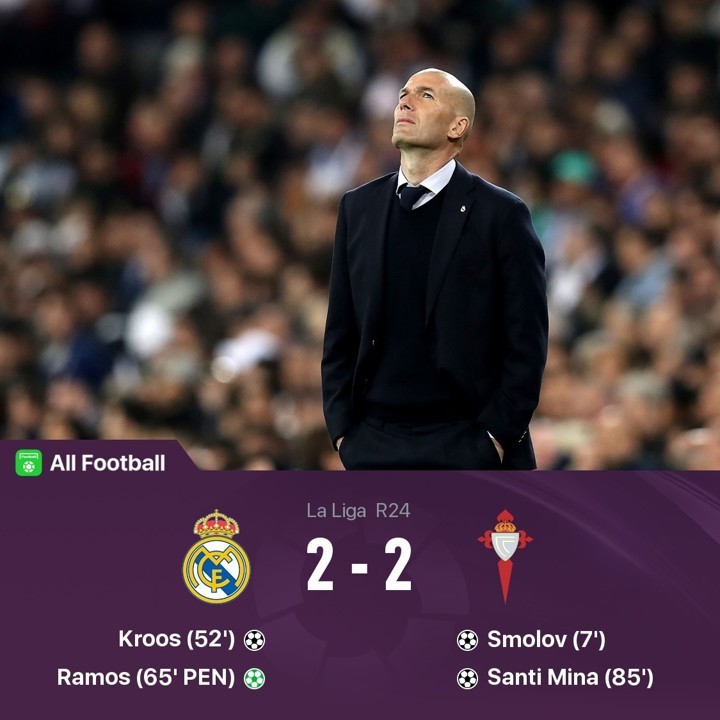 However, Toni Kroos equalised for Real early in the second half before Sergio Ramos scored from the penalty spot.

Ramos thought he had won the game for Real, but substitute Mina scored after being set up by Denis Suarez.

Eden Hazard played 73 minutes for Real as he made his first appearance since November after returning from injury.

Real are now one point clear of Barcelona at the top of La Liga, while Celta move out of the relegation zone and into 17th place.

GOAL! REAL MADRID 0-1 CELTA VIGO - Smolov fires the visitors into the lead, and the fans inside the Santiago Bernabeu are stunned. The forward stayed onside and raced onto Aaspas's pass before firing into the bottom corner past Courtois.

Casemiro tries his luck from 25 yards out, and the midfielder is unlucky as his shot just flies over the crossbar. That was more like it from the home side, they may not have scored, but they tried something different, and it caught Celta by surprise.

Benzema stays onside and tries to fire home from the goalline after meeting Kroos' cross at the far post. The Frenchman is forced wide by his poor first touch, and he finds the side netting as a result.

WIDE!!! Benzema finds Hazard whose cutback picks out Bale at the near post and the winger looks destined to score. Blanco readied himself at his near post, but Bale fired wide from an acute angle, and a goal kick is given.

44' Courtois makes a decent save

WHAT A SAVE!!!!! Celta win a corner and Aidoo meets it and directs a header towards the far post. He practically starts celebrating, but Courtois gets a fingertip to it, and it remains 0-1. Amazing from the former Chelsea man!

49' Disallowed! Ramos scores but the goal is offside

GOAL DISALLOWED!!! Bale picks out Ramos at the far post, but the officials claim the defender was offside and Celta will get the free-kick.

GOAAALLLLLL REAL MADRID 1-1 CELTA VIGO - Kroos fires Madrid back level, and we now have a real game on our hands. Benzema started the move as he played in Marcelo before the left-back turned a cross towards the edge of the box. The pass was meant for Benzema, but Kroos got their first, and he placed his shot into the bottom corner.

Hazard was brought down by Blanco, and that was poor from the goalkeeper, the forward was running out of play!

GOAAALLLLLL REAL MADRID 2-1 CELTA VIGO - The visitors are punished, and Ramos continues his stunning record for a centre-back. The Spaniard took one stride before aiming for the bottom left-hand corner. Blanco went the right way, but he was never going to stop the shot from Ramos.

GOAAALLLLLL REAL MADRID 2-2 CELTA VIGO - Mina makes an immediate impact, and he levels the game with one of his first touches. He raced through the heart of the Madrid defence, and Celta have carved through them like a hot knife through butter. Fellow sub, Suarez played the pass, and Mina fired past Courtois!

89' Benzema's shot over the bar

CHANCE! Benzema shows great strength to bring the ball under control after a cross towards the far post. He holds off the defender and goes for goal, but he puts too much power behind his volley and finds the back of the stand.