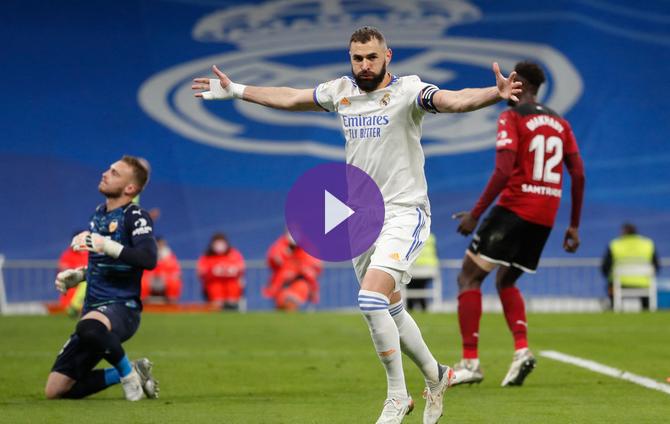 Karim Benzema scored his 300th Real Madrid goal and Vinicius Junior hit a brace as Carlo Ancelotti's side beat Valencia 4-1 to open an eight-point lead at the summit of LaLiga.

Los Blancos suffered a shock 1-0 defeat to Getafe last weekend, but a second consecutive loss never looked likely after Benzema's landmark goal from the penalty spot shortly before the interval.

Vinicius scored twice in the second half and Benzema rounded things off late on as the hosts secured a third consecutive win over Jose Bordalas' men with minimum fuss, despite Goncalo Guedes's goal.

The win increased Madrid's lead over second-placed Sevilla, although Julen Lopetegui's side have two games in hand, while Valencia remained ninth.

Eder Militao, Marco Asensio and Benzema went close before Luka Modric crashed a left-footed effort against the crossbar from 15 yards as Madrid dominated.

Their pressure eventually told two minutes before the interval when Benzema rifled into the top corner from 12 yards after Casemiro had been brought down inside the area by Omar Alderete.

Madrid picked up where they left off after the restart, Vinicius doubling their advantage from close range in the 52nd minute after fortuitously bundling through a crowd of defenders.

The Brazil international grabbed a third after 61 minutes, nodding in from almost on the line after Jasper Cillessen had parried Asensio's powerful strike.

Valencia scored a consolation 15 minutes later, Guedes heading home after Thibaut Courtois had saved his initial penalty, which was given for a foul on Marcos Andre by Ferland Mendy.

Benzema rounded off his memorable game late on, spinning and firing in off the post from 12 yards as Madrid got their title charge back on track in style.