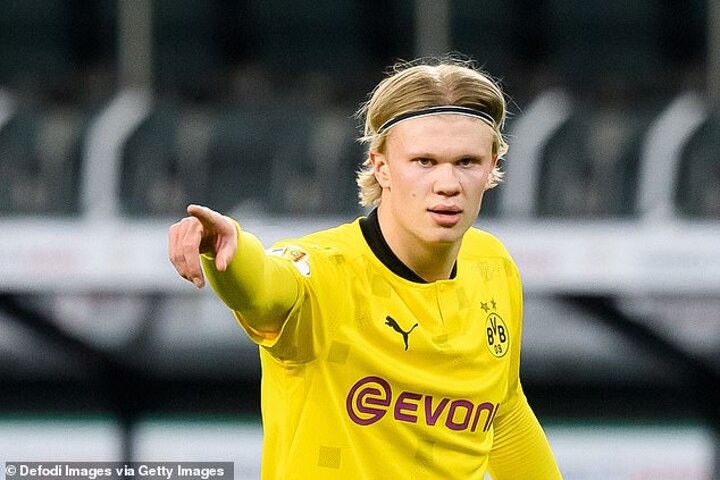 Real Madrid 'believe Manchester City will be their main obstacle' in the pursuit of £100million striker Erling Haaland but 'are optimistic they can tempt the Norwegian to the Bernabeu.'

It looks increasingly likely the Borussia Dortmund forward, 20, will be at the centre of a bidding war between several elite clubs this summer.

According to Spanish newspaper AS, Real will make a move for Haaland if they fall short in their efforts to sign Paris Saint-Germain hotshot Kylian Mbappe.

Real had reportedly earmarked Haaland for the summer of 2022, when a £90m release clause in his Dortmund contract comes into effect, but could move 12 months early to solve a chronic lack of goals.

AS say that Real consider City, with their financial muscle and need to find a replacement for Sergio Aguero, as the main obstacle to a deal for Haaland.

The Bernabeu club also expect Manchester United to play on the Norwegian connection of their manager Ole Gunnar Solskjaer to lure Haaland to Old Trafford.

It has been reported this week that Chelsea have fallen back in the race to sign Haaland despite having the financial means.

Real hope they can exploit their good relationship with Dortmund's hierarchy following a number of transfer between the two clubs in recent years.

But, as AS report, Mbappe remains the No 1 priority for this summer with the France international not responding positively to PSG's efforts to persuade him to extend his contract.

With Mbappe's existing deal due to expire in 2022, PSG would have to sell this summer to get maximum profit for one of the world's most exciting young players.

However, given the financial strain the Covid-19 pandemic has placed on Real, they are considering Haaland as a cheaper back-up option and will be encouraged by reports in Germany that the player favours them.

Haaland's salary of around £10million Euros is also a third of Mbappe's expectations, according to AS.

Competition will undoubtedly be fierce when the window opens. Haaland's agent Mino Raiola has said that only 10 clubs in world football could afford the player.

A report in Sport Bild this week suggested that Haaland had narrowed potential destinations down to Manchester City, Manchester United, Liverpool, Real, Barcelona and Juventus.

Dortmund have also rowed back on their stance over selling one of their star assets.

Chief executive Hans-Joachim Watzke told Handelsblatt this week: 'Asking banks for loans to not sell players is something we will not do.

'If next season there is no audience in the stadiums, we will have to contemplate selling a player. I do not rule out anything in the middle of a pandemic.'

Despite Haaland's phenomenal return of 27 goals in 27 matches so far this season across all competitions - including 17 in 18 Bundesliga games - Dortmund are far from assured of Champions League qualification.

They are fifth ahead of Saturday night's Klassiker with leaders Bayern Munich and have a three-point gap to bridge to Eintracht Frankfurt in fourth.