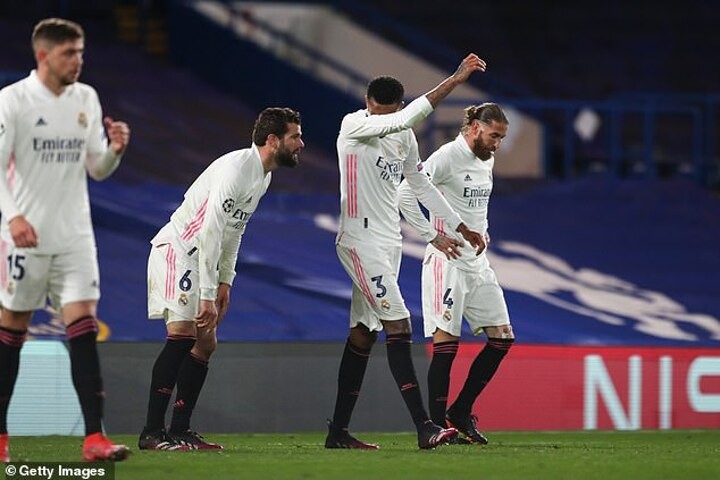 Real Madrid are hoping that – united in Champions League disappointment – they still have a chance of bringing the arrival of Kylian Mbappe forward a season and welcoming the 22-year-old this summer.

Mbappe was knocked out of the Champions League on Tuesday night and 24 hours later it was Real Madrid's turn, desperately missing the attacking talisman they are convinced the French international will eventually become for them.

With the European Super League now a failed heist in the garbage can of history there will be no US investment bank windfall to drive a team rebuild, and with fans locked out of Spanish stadiums until the start of next season, the club's worst scenario economic forecasts are about to become a reality too.

But, boosted by the possibility that Tottenham will take Gareth Bale off their hands this summer and convinced Mbappe wants to move to Madrid enough to agitate for an early departure, they have not given up on the possibility he could arrive this summer.

They are pinning their hopes on Mbappe sitting tight and refusing to sign a new contract that would make him a free agent in 2022. If he puts pressure on the club to let him leave this summer then Madrid believe the prospect of him under-performing in his final year and then leaving for nothing might convince PSG to sell him this summer.

It would still leave Real Madrid relying on his willingness to accept the salary freed up by Gareth Bale's departure, and raising transfer funds by selling players, but the club would be obliged to keep trying.

For now their post-Champions League exit meltdown is on hold because by Saturday afternoon they could have the Spanish title within their grasp, and landing the big domestic prize would change the way the 2020-21 season is looked back on.

If Atletico Madrid fail to beat Barcelona at the Nou Camp on Saturday then Real Madrid can win the league by winning their remaining four matches of the season.

Their destiny will be back in their own hands and if they were to pull off a third league title for Zidane in four seasons it would go down as the most remarkable of the three because of the injuries and illness that have blighted them this season and the fact that for so long the league seemed like Atletico Madrid's and then Barcelona's to lose.

Even if Atletico slip up it will still be tough for Madrid because their last four games are home to Sevilla on Sunday, away to Granada and Athletic Bilbao and home to Villarreal. Those two away fixtures are against durable sides that will not make it easy for Zidane's team, and the home games are against sides still fighting for something this season.

Zidane took much of the blame for the loss to Chelsea but for everyone criticising the coach's team selection there was someone else pointing out how limited his options were.

Post-match summarisers on Spanish television marvelled at the power of the Chelsea team that had knocked Real Madrid out. Gustavo Lopez said: '(N'Golo) Kante was the man of both the legs.' And Santi Canizares added: 'Chelsea looked a brilliant football team tonight. They are have a very good coach and they have a great chance in the final.'

Ruben Uria, the journalist who carried out the bombshell Lionel Messi interview last summer, tweeted: 'Chelsea were brutal. The best thing for Madrid was the scoreline. It could have been worse. There is a lot of merit that they have reached this far but this was a drubbing.'

Spanish journalist Alberto Ortega added: 'The defensive partnership of Eder Militao and Nacho stopped Liverpool and Barcelona. Sergio Ramos got fit again and Zidane changed his system to accommodate him and they shipped goals. It's not a coincidence.'

As Marca headlined: 'The umpteenth invention from Zidane did not work'. The French coach had been deprived of his first-choice right back Dani Carvajal, his second choice Lucas Vazquez, and his third option of playing midfielder Fede Valverde at full back was made more risky by the player's recent coronavirus lay-off.

So he came up with a back three that put Ramos between Nacho and Militao and used Vinicius as a wing back. The consensus was that a) it didn't work, and b) with options so limited an alternative plan might also have been doomed to fail.

All the focus now turns to Sevilla on Sunday. And the hope that Barcelona take something from Diego Simeone's side 24 hours before.

If results go their way Real Madrid could be top before the weekend is over. If they are, expect the title charge to take away the European exit blues. If not then there will be nothing to fill the void; nothing but more talk that Mbappe can somehow be made possible this summer.