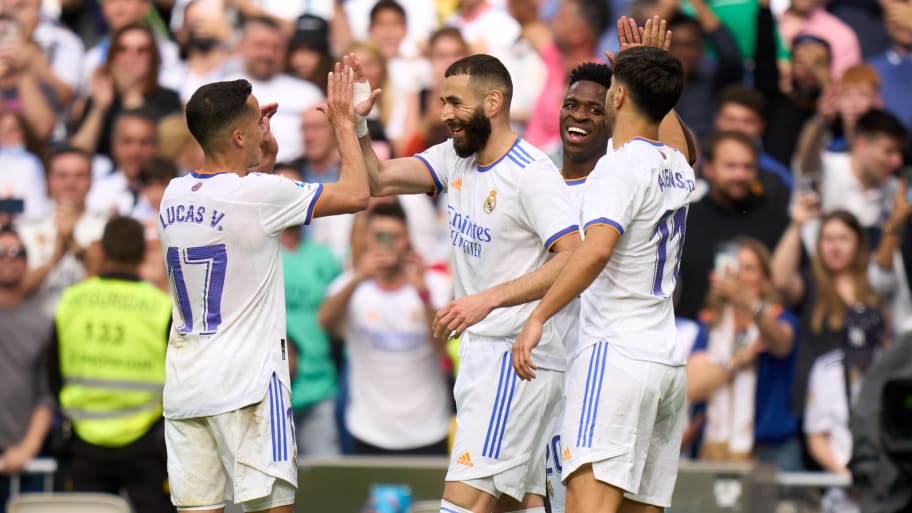 Los Blancos have led the Spanish table for all but five weeks this season and looked near certainties to become champions for most of this campaign, with Barcelona, Sevilla and Atletico Madrid all faltering in the title race.

With one eye on Wednesday's Champions League semi-final second leg against Manchester City, Carlo Ancelotti made several changes to the starting lineup, with Casemiro coming in at centre-back to help Real with their defensive injury crisis.

Luka Modric was a surprise starter given the mass rotation and the fact Real only needed a point to secure their crowning glory, but was one of the stars of the show at the Santiago Bernabeu.

Real Madrid opened the scoring after 33 minutes through Rodrygo after he combined nicely with Marcelo down the left wing before dribbling inside and finding the far corner of Diego Lopez's goal.

Rodrygo grabbed his brace shortly before the break when Mariano Diaz robbed Yangel Herrera of possession, sitting Lopez on his backside with another controlled finish, while Marco Asensio added a third on the counter just after half-time. Substitute Karim Benzema rounded off the scoring.

After failing to win La Liga in his previous two seasons with Real Madrid, Ancelotti has become a champion of Spain at the third time of asking. In doing so, he has become the first manager in history to win each of Europe's top five leagues - Spain's La Liga, England's Premier League, Germany's Bundesliga, France's Ligue 1 and his native Italy's Serie A.

Barcelona dominated La Liga in the 2010s but the last three titles have now gone to the city of Madrid, with Real triumphing either side of Atletico's 2021 glory.

Real's 2020 title was also sealed behind closed doors and at their Estadio Alfredo di Stefano training ground facilities, so this will be the first league campaign that they have emerged victorious from in front of fans since the 2016/17 season.

This article was originally published on 90min as Real Madrid clinch their 35th La Liga title with Espanyol win.