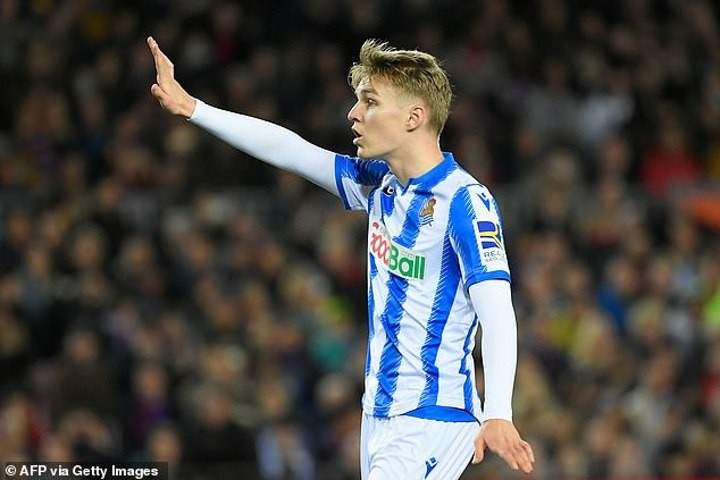 Real Madrid could cut short Martin Odegaard's two-year loan at Real Sociedad if LaLiga doesn't resume in the coming months, according to reports in Spain.

Odegaard signed a two-year loan deal last summer and has excelled this season after scoring seven goals and making assists in 28 games.

But with the coronavirus crisis beginning to cripple clubs financially as they are starved of income, Odegaard could now return to Madrid.

Many clubs are likely to have reduced transfer budgets as they struggle to make ends meet and, according to Mundo Deportivo, Madrid view Odegaard as a potentially valuable addition to their first team from within their current squad.

Madrid are also concerned about the uncertainty over Luka Modric's future at the Bernabeu, with the midfielder now in the final 12 months of his contract.

Odegaard is seen as Modric's long term successor and Madrid could opt to sell Modric and bring in much needed money from his sale, while bringing their 20-year-old prodigy back to the club.

Odegaard has previously spoken of his desire to remain at Sociedad for the duration of his two-year loan to ensure he's fully prepared to make the best possible impact at Madrid when he returns.

But the current circumstances could accelerate his promotion to Madrid's first team, while Sociedad may also be forced to cut the Norwegian from their wage bill in a bid to safeguard their own financial status.

Odegaard's contract at Madrid expires in June but Madrid have the option to extend it by a further year and it remains the player's dream to become a star for the club.

As a result, Madrid could look to offer him a new and improved long term deal to secure his future and ensure they don't have to spend a significant sum of money on another young talent.