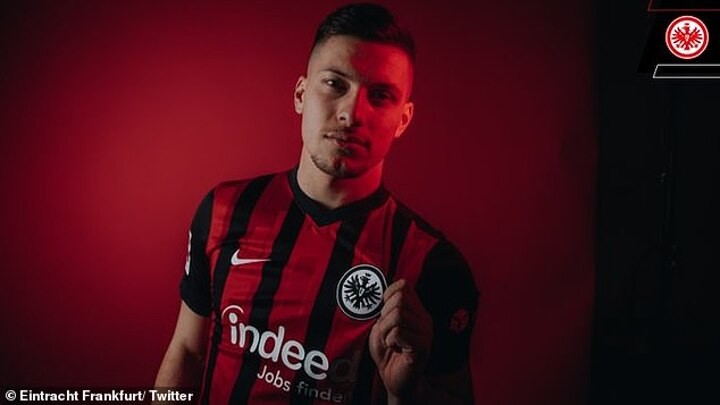 Real Madrid have shipped Luka Jovic back to Eintracht Frankfurt on a loan deal for the rest of the season just 18 months after spending £62million on him.

Huge things were expected from Jovic when he first moved to the Bernabeu as a burgeoning forward in the summer of 2019 but he's failed to live up to the billing.

The 23-year-old has endured a torrid time in the Spanish capital, scoring just two times in 32 games for the club, and has now rejoined Frankfurt for the remainder of the season.

Zinedine Zidane had completely lost faith in Jovic, who was only handed five appearances this season, while he also landed himself in hot water with the club for breaking quarantine rules last year.

There is no buy-option included in the deal but it has been reported that Madrid would be open to selling him - though they recognise they would be hard-pressed to recoup most of the £62m they paid to sign him in the current financial climate.

Jovic, who will wear the No 9 shirt at Frankfurt, enjoyed the best spell of his career at the club, netting 36 goals in 75 competitive games, and will be desperate to rediscover his scoring touch during his loan.

'Luka hasn't had an easy time of late in Madrid,' Frankfurt chief Fredi Bobic admitted on Thursday after confirming the striker's return.

'It's important for him to find his form again. He had a strong desire to return to Eintracht.

'Luka can use the next few months to get back to his best in an environment that's familiar to him.

'Real Madrid know that he'll be well looked-after with us and can continue his development. And for us, it's clear that we have another outstanding option at centre-forward.'

As Jovic has already contracted COVID-19 in October, he is not required to quarantine following his return to Frankfurt.