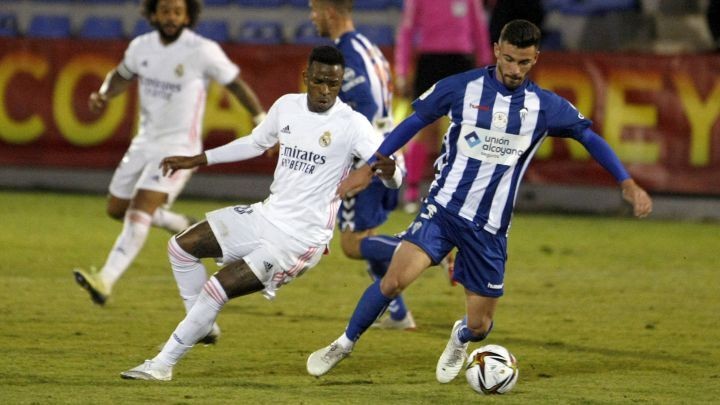 Real Madrid were dumped out of the Copa del Rey by Segunda B side Alcoyano. Here we take a look at how Zidane's side performed in the shock defeat in Alicante.

Real Madrid crashed out of the Copa del Rey, losing away to Third Division side Alcoyano with below-par performances from several players. Zinedine Zidane started a second-string team on the night, before bringing on the big guns, but it was too little too late for Los Blancos.

Came in for his Madrid debut after two and a half years. Very calm first half. He made a good save by from a Mourad header. Looked nervous under high balls at times. In extra time he was lucky that shot went straight into his hands. 6/10

Good in defense despite not having played since September. Offered little going forward and was evenutally replaced by Eden Hazard in the 98th minute. 5/10

First goal for the Brazilian in a Real Madrid shirt, heading home from Marcelo's cross on the stroke of half time. Mourad caused him some concern at times, but in general he coped well. For Alcoyano's equaliser he could have done more to intercept the corner that ended in a goal from Solbes. 7/10

The 20-year-old came in for his Madrid debut in place of the absent Nacho. He isn't the tallent centre-back at the club, but was calm on the ball throughout and he looks composed in possession. Good debut, despite the defeat. 7/10

The Brazilian picked out Eder Militao with a fine ball to the back post for 1-0. Offered Madrid an outlet on the left side and combined well with Vinicius in the first half. Militao and Chust they covered for him as he spent much of the game in the opposition half. 6/10

Caused the sending off of Ramón López in extra time. Lost Juanan's for Alcoyano's crucial winner in the 115th minute of extra time. 5/10

The Uruguayan was very quiet on the night. Provided some defensive cover. Provided a good ball to Vinicius, who lost composure before finishing. Had a last minute opportunity to make it 2-2 but smashed his volley into Solbes. 4/10

He started with a lot of promise, combining on the left with Marcelo and Vinicius. He looks better physically, although still far from his version of years gone. Substituted in the 98th minute for Toni Kroos. 5/10

Playing in a more advanced role, he was in fact the Madrid player who generated the most danger. Had a couple of long-range efforts saved by 41-year-old keeper José Juan. Went close to scoring with a header at 1-1. Almost gave away a penalty, the foul was inches from the line and seconds before Juanan made it 2-1. 6/10

Not his best night in a Madrid shirt. Picked up a yellow and looked frustrated from the early stages. His best chance was a left-footed shot that in the end was an easy stop for the Alcoyano keeper. Substituted in the 67th minute for Benzema after an awkward elbow on Primi. 4/10

Started well, linking up with Marcelo on the left wing. The young attacker is not going experiencing his best spell under Zidane and didn't do enough to stake a regular claim in the starting XI. 5/10

Came on in the 67th minute for Mariano. Saw a shot on goal blocked at 1-1, which would've given Madrid the lead. Couldn't find the back of the net but led the line better than Mariano. 5/10

Entered at the beginning of extra time for Vinicius. He started on the left, with Hazard moving to the right. Was close to earning a penalty; referee Sánchez Martínez waved the play on. Seconds later, he hit a low shot that José Juan stopped. 5/10

Was brought on in the 98th minute for Isco to refresh the midfield in extra time. Saw plenty of the ball without being able to conjure up the magic from midfield needed. 5/10

Positioned himself on the left, combining at times with Asensio. Didn't look up to speed on the wing. A long way off the player at Chelsea. 5/10