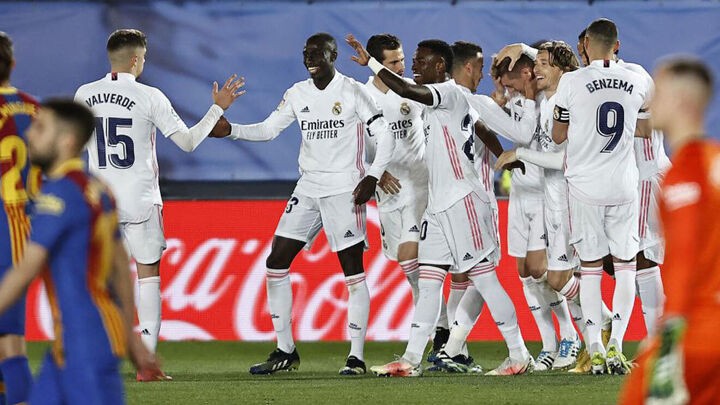 Zinedine Zidane is working hard to bring another LaLiga Santander title to Real Madrid. The Frenchman's goal is to win the four remaining games and retain the title that he guided the side to last season.

Atletico Madrid and Barcelona's draw at the Camp Nou on Saturday has put everything in Real Madrid's hands, and they know that four wins will see them come out on top of the pile for the second year in a row, despite the countless problems they've had throughout the season.

Zidane is an expert when it comes to run-ins. Nothing that came before this point matters, which Real Madrid showed last season with their storming run towards the title after the COVID-19-enforced break.

Real Madrid haven't lost in LaLiga Santander since January 30. Since then, they've won 10 and drawn four, claiming 32 points from the 42 on offer.

They're experts in the final stretch of a season under Zidane, and they know that they don't have to keep going for too much longer to guarantee silverware.

The comeback that led to the last title

The 2019/20 season saw them in a similar position, but with fewer rivals in the race for the title.

Los Blancos managed to win 10 games in a row after lockdown, drawing one, which saw them move ahead of Barcelona and end the season with an unexpected league title.

Although they won't repeat a double this season, they can take a lot from the 2016/17 season. In that campaign, Barcelona won in Matchday 33 at the Estadio Santiago Bernabeu, piling pressure onto Real Madrid for the last few matchdays.

Then, they won each of their remaining games to pip Barcelona.

In Zidane's first season in charge, Real Madrid put unexpected pressure on Barcelona when the title looked to have been decided. In Matchday 26, they were 12 points adrift, but they kept on winning and managed to push Barcelona right until the last day of the season.

One more run needed, with the head-to-head advantage