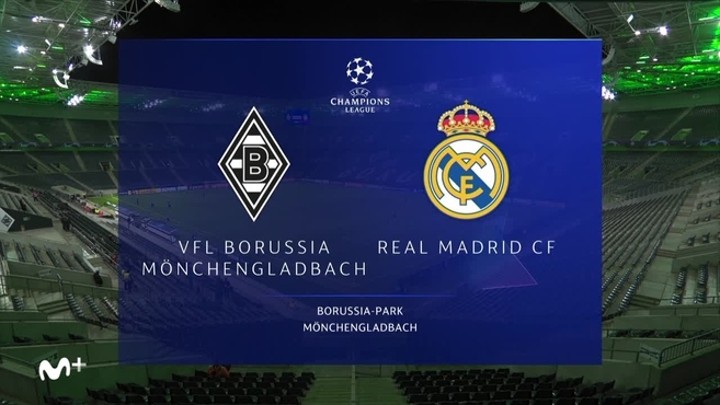 A dramatic late comeback earned Real Madrid a precious point in a 2-2 draw with Borussia Monchengladbach in Group B of the 2020/21 UEFA Champions League on Tuesday night at Borussia Park.

Staring at a 2-0 deficit with just minutes to play and their Champions League lives potentially on the ropes, Los Blancos brought out their trademark never-say-die spirit and found late goals from Karim Benzema and Casemiro to rescue a key result ahead of back-to-back fixtures with Inter on the horizon.

Zinedine Zidane went with the same starting XI that took to the pitch at the Camp Nou in the Clasico, with the lone exception being Lucas Vazquez in for Nacho at right-back.

Los Blancos came out of the gates looking sharp and the chances started coming for Zidane's men, including a stinging right-footer from Toni Kroos that Gladbach goalkeeper Yonn Sommer had to stretch to save.

Gladbach had not troubled Thibaut Courtois in the Madrid goal very much, but that changed in an instant when a poor clearance from Raphael Varane ended with Alassane Plea crossing to Marcus Thuram, who struck a left-footed bullet into the net for a 1-0 lead.

The visitors looked to react and and an exquisite one-touch pass from Fede Valverde set up Marco Asensio with a chance, but once again Sommer stood tall and made the big block.

The second stanza started off with a bang for the visitors, as Asensio cracked a volley off the crossbar, followed minutes later by a Vinicius shot that missed wide after some superb work from Fede Valverde.

But just like in the first half, Gladbach struck on a rare venture forward in which a volley from Plea was blocked by Courtois right to Thurman, who was kept onside by Mendy and it was an easy redirect into goal for the son of French legend Lilian Thurman for a 2-0 advantage.

It could have easily been three in short order if not for Courtois, who had to make a save from a Plea shot with nothing standing in between the two inside the area. Lars Stindl was next in nearly notching a third with a right-footer that rolled inches wide of the far post.

Zidane was desperate for some sort of spark, so Luka Modric was summoned from the bench to replace Kroos, while Eden Hazard returned from injury to make his season debut by replacing Vinicius.

Outside of a link-up between Benzema and Hazard that ended with the Belgian narrowly missing wide, Madrid's attempts to pull a goal back were reduced to hopeful crosses into the box that the Gladbach defence handled with ease.

Rodrygo for Asensio was Zidane's last roll of the dice, and a last surge saw a Fede Valverde floated cross get kept in by Casemiro, who headed back in front of goal and Benzema met it with an acrobatic volley to cut the deficit to 2-1.

Plenty of time was still on the clock for an equaliser and it would come in stoppage time with a goal that was almost a carbon copy of the first, albeit with different protagonists. Modric lifted in a cross from the right flank that Sergio Ramos headed back across goal where it met the stabbing foot of Casemiro, who scored from just a few metres out to earn Madrid the dramatic 2-2 draw.